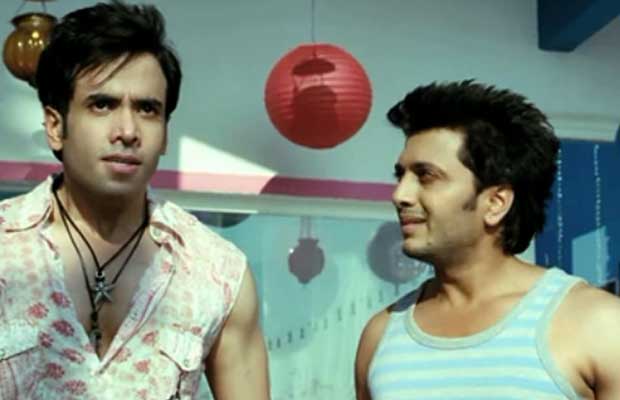 [tps_footer]‘Kyaa Kool Hain Hum 3’ is all set to tickle your funny bones next year in 2016. The film which will be one of its kinds in the Bollywood industry is finally out with its official trailer. The first glimpse of the film was naughty to the core with an over the top se**** connotation. The trailer is also not short of the dirty appetite. Starring Tusshar Kapoor, Aftab Shivdasani and Mandana Karimi in the main leads, ‘Kyaa Kool Hain Hum 3′ is going to be a step higher than its prequels.

The trailer initiates with the comic actors Tusshar and Aftab introducing them as po** stars. The two actors will once again don their hilarious one liners with extravagant expressions. Just like the prequels, Tusshar and Aftab will be seen as best friends in the third installment too. The only difference this time is that the two Kool Boys will be seen as po** stars.

The film which is tagged as the first Po** com movie in the industry is not just filled with naughty and teasy double meaning stanzas; the movie also has a family oriented twist. The story will take a drastic turn when Tusshar’s love interest in the film who belongs to a very traditional family will come in the forefront.

Bigg Boss contestant Mandana Karimi is also ready to raise the hotness meter high with her glamorous presence in the film. From witty one liners to all sorts of funny stints, ‘Kyaa Kool Hain Hum 3′ is surely going to start the year 2016 on a hilarious note.

Directed by Umesh Ghadge, the film is on the verge of being one of the most awaited adult comedies of the coming year. ‘Kya Kool Hain Hum 3′ is all set to hit the screen s on January 22nd, 2016.
[/tps_footer]