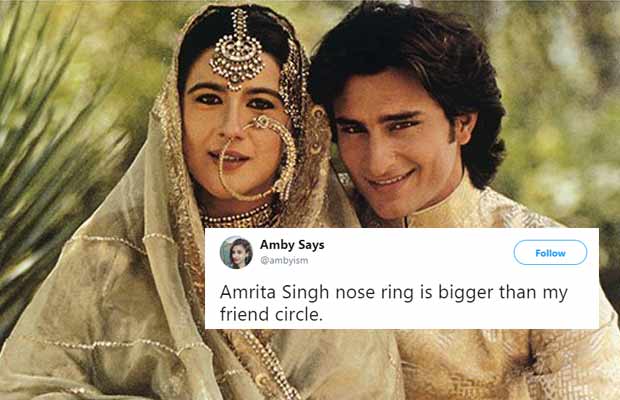 People are trolling Amrita Singh and Saif Ali Khan over their old picture!

The Bollywood actors Saif Ali Khan and Amrita Singh were once a married couple. They got married in the year 1991 and have two kids together, namely Sara Ali Khan and Ibrahim Ali Khan. Unfortunately, both of them decided to part ways and ended their 14 years long marriage in 2004.

There is an old picture from their marriage where the two of them are seen very happy being with each other. Dressed in a sherwani, the young Saif is looking like a very handsome groom. On the other hand, Amrita is looking stunning in her bridal avatar.

But what has suddenly caught everyone’s attention is the actress’ nose ring, which is actually oversized. The nose ring is more than half as big as Amrita’s face herself. No doubt that she is looking pretty in her attire, but the jewellery is looking over the top.

People have started trolling her for the same. The social media Twitter has been flooded with comments from the people. They are making jokes on the picture which are hilarious!

Check out some of the tweets made by the people:

On a related note, Saif Ali Khan is very soon going to be seen a dark comedy film titled Kaalakaandi. He is also a part of films like Chef and Baazaar.