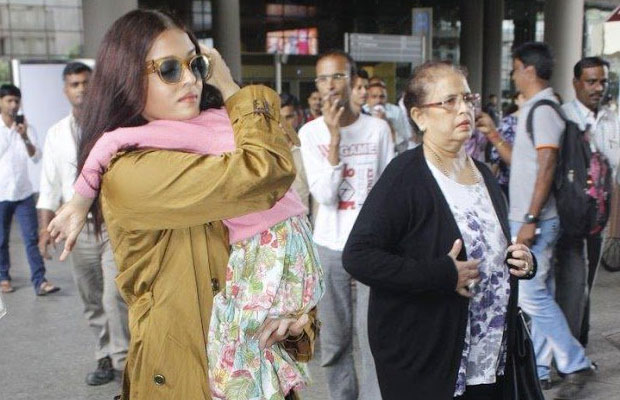 Bollywood actress Aishwarya Rai Bachchan, who was holidaying in London with her family, returned back to Mumbai earlier today. As soon as she walked out of the Chhatrapati Shivaji International Airport along with her mother Brinda Rai and daughter Aaradhya, the actress was instantly surrounded by shutterbugs. Each and every photographer was trying to get pictures of the actress and her family. While some were clicking pictures, some threw Questions as she was making her way inside the car.

Reportedly, things went worse and the actress was shocked when a videographer tried to get too close to the trio for their close up pictures. Well, bodyguards make sure that there is no harm caused to the stars and so he pushed away one of the videographers. Due to this, the videographer lost his balance and fell on Ash’s mother. Lost in the chaos, Ash’s mother too could not balance herself and fell down flat on the face.

Just because of the aggressive behavior of photographers and videographers, Aishwarya Rai Bachchan’s mother injured herself with a severe cut on her head. In between all these, Aish was trying to protect her little daughter Aaradhya. Somehow the trio managed to get into the car. We hope her mother is all fine!

This is really not acceptable of getting your job done at the cost of someone’s life! This is not fot the first time, couple of months ago, Salman Khan’s father Salim Khan face the same incident, which left son Sohail Khan furious.