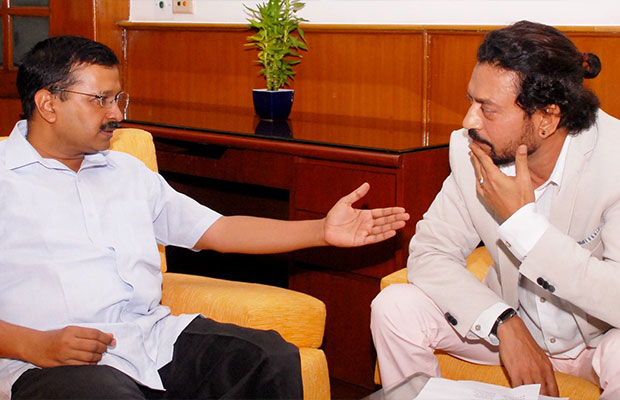 Irrfan Khan’s upcoming film ‘Madaari’ is a thought provoking one. The movie is already appreciated by the tinsel town celebs. Directed by Nishikant Kamat the film revolves around the issues of governance and the system. Moreover, it also highlights the plight of the citizens. ‘Madaari’ is all set to hit the screens tomorrow.

Irrfan is leaving no stone unturned to promote the film. The actor was seen tweeting a few days ago to some of the most prominent faces of the country. The credible star took to twitter to ask for an appointment with PM Narendra Modi, Arvind Kejriwal and Rahul Gandhi as he wanted have a discussion with them.

While Rahul Gandhi and Kejriwal gave thumbs up to the actor for the personal interaction, PM Modi’s office reverted stating that Irrfan Khan should write a letter to the PM as he is busy with upcoming parliamentary sessions. Irrfan immediately took the opportunity and flew to Delhi to catch up with Mr. Gandhi and Mr. Kejriwal.

Khan was spotted engrossed in a serious discussion with Arvind Kejriwal in his Aam Aadmi Party office today. The interaction lasted for 30 minutes where the two discussed over a number of political issues and freedom of expression. Irrfan interviewed the leader on these topics and tried getting his views over it. Before Kejriwal, the actor had also met RJD chief Lalu Prasad Yadav on his visit to Bihar state capital, Patna recently.

Well, we can’t help but think that Irrfan Khan is becoming the voice of the people!