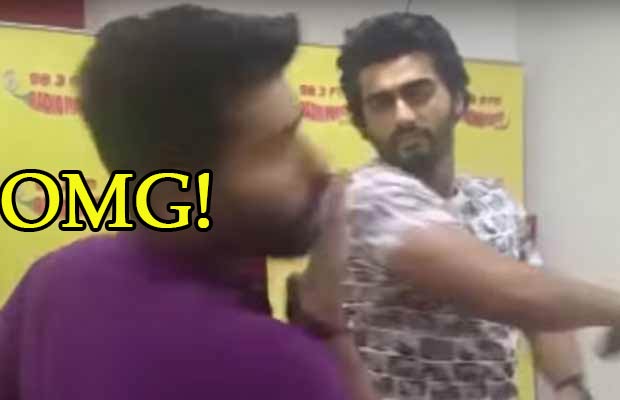 [tps_footer]Arjun Kapoor has always been a fun loving person with a lot of positivity and cheerful attitude that he sports effortlessly, where ever he goes and that killer smile on his face, it’s always too hard to avoid and it does bring a smile on our faces too. But, recently something has happened that is not really pleasant to know.

There is a video of Arjun Kapoor losing his cool and slapping Radio Mirchi Rj Arpit for asking him a question in a wrong way. Arjun Kapoor was in Radio Mirchi studio to promote his movie Ki And Ka starring Kareena Kapoor Khan but he went alone to promote this movie. And, unfortunately the experience was not so good. Rj Arpit was full of energy and excitement but he landed up with a weird question and he asked Arjun if people have stopped offering him male characters and why he is doing female roles ?? Check out the video to know the action-reaction between them.

Initially, both Arpit and Arjun were happy and looked ready for a fun interview but it turned out to be nightmare for Rj Arpit and after slapping him Arjun asked the cameraman to switch off the camera and before anything else could be captured, Arjun broke the camera into pieces.

After watching this video, we don’t know if this is just a publicity stunt before the release of the film. ‘Ki And Ka’ is an upcoming romantic comedy, written, directed, and produced by R. Balki. The film follows a young, married couple whose relationship challenges the gender roles placed upon women and men in the Indian society. The movie also stars Amitabh and Jaya Bachchan in special extended cameo. The film will be released on April 1, 2016.[/tps_footer]