Karan Johar’s Ae Dil Hai Mushkil starring Anushka Sharma, Aishwarya Rai Bachchan, Ranbir Kapoor and Fawad Khan is making headlines since its inception. The trailer and the songs of the film have already been ruling the hearts of the audience. The film’s latest song Channa Mereya has been grabbing all the eyeballs over Ranbir Kapoor and Anushka Sharma’s mesmerizing avatar. Anushka looks jaw-dropping beautiful in bridal attire in the song and walking in that bridal attire was not an easy task for the actress.

As earlier we reported, Anushka Sharma had shot the song wearing Manish Malhotra designer 17kgs lehenga, which was a real struggle for the actress. The song was shot over the span of four days and in a place with no elevators and we can already imagine how difficult it might have been for the actress. A couple of days ago, Anushka shared a video of her wearing the same lehenga and captioned it as, “Wearing a 17kg lehenga was indeed Mushkil!!!? #ADHM#ChannaMereya #AeDilKiDiwali”

After Anushka shared the behind the scenes video, Manish Malhotra commented saying, “You looked beautiful and made a stunning bride my dear’

In his second comment, Manish Malhotra sarcastically described that the actress has not credited him anywhere in the video. Manish posted a comment saying, ‘And thanks for not tagging or even mentioning me considering the amount of passion, love and hard work we put behind the outfit.’ 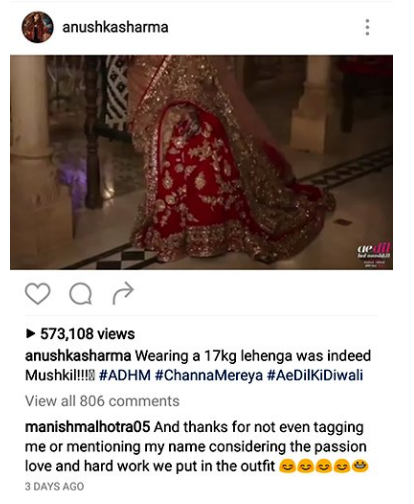 Well, we wonder if Manish Malhotra was offended with Anushka or just took a dig at the actress in the smartest way. It remains to see how Anushka reacts to this!