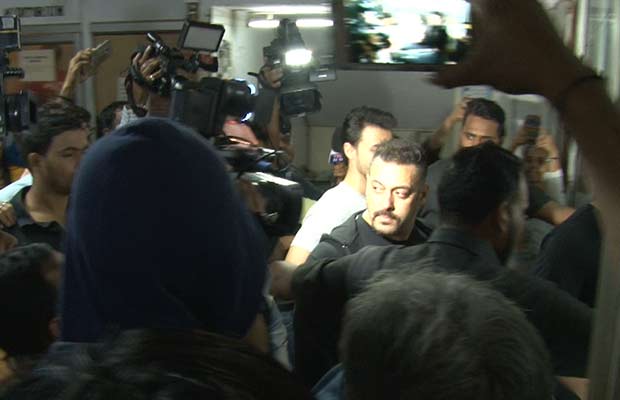 Salman Khan was spotted today attending the red carpet premiere Daisy Shah‘s debut play ‘Begum Jaan‘. The actor, who didn’t make a solo appearance to the event, was accompanied by his family as well.

However, the actor completely avoided speaking to the media persons who were quite excited about the actor’s appearance at the event. Salman Khan, who did come up on the stage just stood for a photo-op. He did not speak or answer any questions the media tried asking him.

Post the photo-op, the actor made a quick exit from the venue, avoiding all the media persons altogether. So did the family members accompanying him. Neither of them spoke to the media at all.

In an incident similar to this, Salman Khan had completely avoided giving any media bytes at Spain post the IIFA awards.

Now this is not the only thing that has left the media bewildered.

The actor appeared very angry at the reporter for his question. He didn’t give any answer however the deadly ‘threatening’ look that the reporter got is enough for everyone to guess what Salman‘s answer could be!

Does the actor not feel sorry for his comments? Does he still stand for what he said? Does he not feel the words that he used utterly despicable?

Tell us what you feel in the comments below!