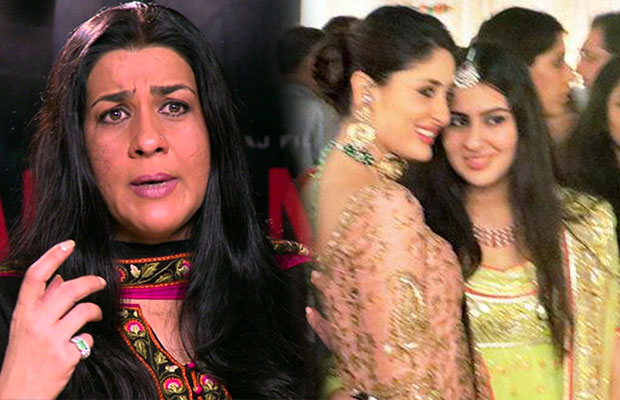 Kareena Kapoor Khan will soon embrace motherhood. The actress will welcome her first baby with husband Saif Ali Khan this December. Kareena’s marriage with Saif Ali Khan was an eye-grabbing affair. Saif who has already been married once is also a father to two children. Sara and Ibrahim who are known to be cordial with their father’s decision have always been calm amidst the shutterbugs.

Well, their mother and Saif’s ex-wife Amrita Singh is not too happy about something. Recently, Sara stole all the limelight when she attended Kareena Kapoor Khan’s birthday bash. Not only was her presence the talk of the town, but also her fashionable avatar grabbed many eyeballs. The star looked glamorous as ever.

It is now in the air that Amrita does not like Sara in these high fashion clothes. Amrita who is mostly seen in kurtas and churidars expects her daughter to be clad. It is also said that Amrita feels that Kareena Kapoor Khan is a bad influence on Sara.

Apparently, Sara Ali Khan is quite influenced by her stepmom Kareena Kapoor Khan who is a fashion icon. Moreover, the star kid is already gaining attention for her good looks. Well, mom Amrita Singh is not too happy about this unnecessary attention.

Kareena has earlier commented on her rapport with Sara Ali Khan saying that she shares a wonderful relationship with her and they are like best friends. Bebo also expressed that Sara is her bar hopping partner and that they chat over a glass of champagne!

Sara is much in the news for making her tinsel town debut.