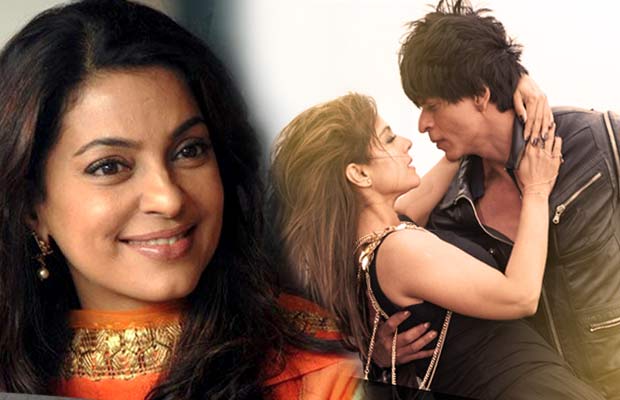 [tps_footer]Juhi Chawla and Shah Rukh Khan are known for their best friendship. The two talented stars have acted together in many hit films and their on screen chemistry is applauded by the masses. Well, seems like there is a slight crack in their rapport lately. Juhi Chawla who has been away from the silver screen will soon be seen in the movie ‘Chalk n Duster’.

While interacting recently, Juhi Chawla confessed something not so pleasant. The actress was asked about Shah Rukh Khan’s film ‘Dilwale’. Juhi who is yet to witness the film on the silver screen commented on the same saying, “I haven’t heard many good things about the film. So, I thought of skipping. It is okay. Even if I don’t watch, it wouldn’t matter.”

Well, seems like Juhi is following critics way too much. The beautiful diva further also hinted at the fact that she would like to pair up with Shah Rukh Khan again. Juhi was asked when the masses will get to witness herself and SRK back on the silver screen, to which the actress replied, “Next time you interview Shah Rukh, why don’t you ask him this? If I have my way, I would work with him this year. It is about finding that script and that maker, who will say, ‘Okay let me put you both together’. But I would love to work with him again.”

Seems like, Shah Rukh is not the only one on Juhi’s wish list. The adorable talent bundle Juhi who gave a blockbuster debut with Aamir Khan in the film ‘Qayamat Se Qayamat Tak’, said, “Aamir and Shah Rukh are my favourite co-stars. I have grown in my career with them. I would love to work with Aamir.”

The witty actress Juhi Chawla did not leave our Dabangg Khan Salman too, the actress was smart enough to add, “Actually, I should work with Salman. We have never worked with each other. That would be fun.”

Well, Juhi Chawla will soon be seen in the film ‘Chalk n Duster’ which also stars Divya Dutta and Shabana Azmi. The trailer of the film has already impressed the masses; the film is scheduled to hit the screens on January 15th, 2016.