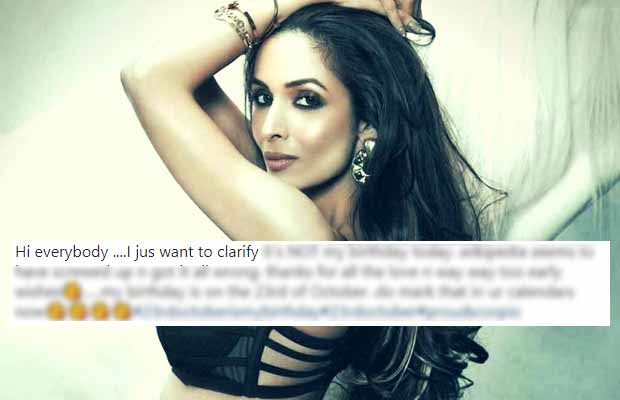 It is not Malaika Arora’s birthday, but people are still sending her best wishes!

The Bollywood actress Malaika Arora has many fans and well-wishers. But the actress must have a got a shock when everyone started wishing her a happy birthday on the wrong date! Yes, you read that right. It is not the actress’ birthday. But in spite of that, her fans and many news portals sent her the best wishes today.

Wishing the Bollywood diva who firmly reinstate our faith in the adage 'Age is just a number', #MalaikaAroraKhan a very Happy Birthday! pic.twitter.com/EpAxMT481i

The social media got flooded with messages from the people. There were several feature stories which were doing the rounds of media marking the day as her birthday.

The actress had to personally come forward and clarify that it’s not her birthday. She took to Instagram and made it clear. But she also thanked everyone for the early wishes!

Posting a beautiful picture of herself, she wrote, “Hi everybody ….I jus want to clarify it’s NOT my birthday today. wikipedia seems to have screwed up n got it all wrong. thanks for all the love n way way too early wishes….. my birthday is on the 23rd of October .do mark that in ur calendars now #23rdoctoberismybirthday #23rdoctober #proudscorpio.”

That is so sweet of Malaika! Isn’t it?

Well, it is not Malaika Arora’s birthday. But still, the day has brought many celebs in this world. It is the Bollywood actress Priyanka Chopra’s late father, Dr Ashok Chopra’s birth anniversary. Today is also the birthday of Begum Jaan actress Gauahar Khan. Along with them, the TV actress Asha Negi is also celebrating the day as her birthday.