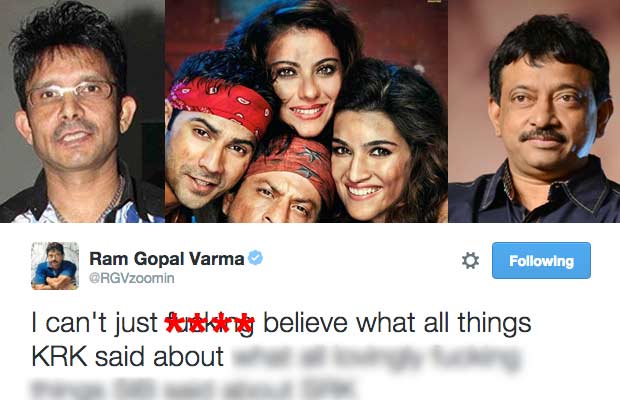 [tps_footer]Ram Gopal Varma and Kamaal R Khan are two celebrities who are much in news for their sarcastic taunts than their films. Once again RGV and KRK have created twitter banter. This time the two celebs are not entangled in a war of words but have rather pin pointed Shah Rukh Khan’s film ‘Dilwale’. RGV apparently tweeted about the things what Kamaal R Khan had told him.

The tweets apparently were the things which Sanjay Leela Bhansali told KRK about (presumably about Dilwale). As we all know Ram Gopal Varma is one filmmaker who is known for his bizarre statements and unchecked opinions. The filmmaker not only tweeted once about SRK’s ‘Dilwale’, but went on to post a series of tweets regarding the same.

Ram Gopal Varma tweeted, “I just so loved what KRK told me about what SLB said about Srk’s DILWALE..it was very KRKially enlightening.”

The director further added, “I am really honestly surprised about what SLB thinks about SRK’s Dilwale against Devdas versus Sawariya…truly amazing.” 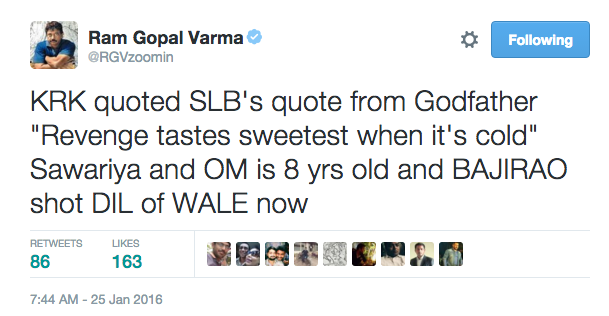 Just when the tweets outnumbered, KRK calmly got himself out of the situation by saying, “Sir @RGVzoomin Mere Naam Par Bill Kyon Faad Rahe Ho? Say directly whatever you want to say.” 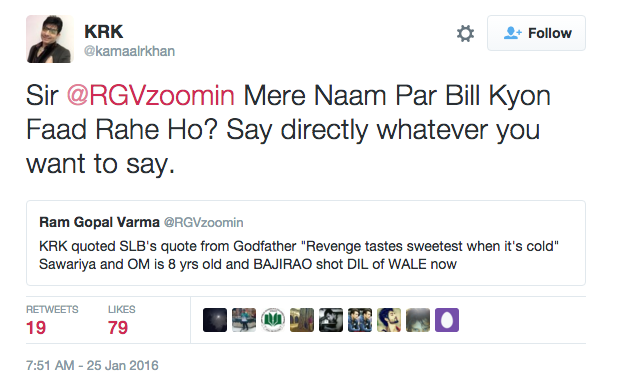 Well, all we can say is, the war between ‘Bajirao Mastani’ and ‘Dilwale’ is not going to end so soon.[/tps_footer]