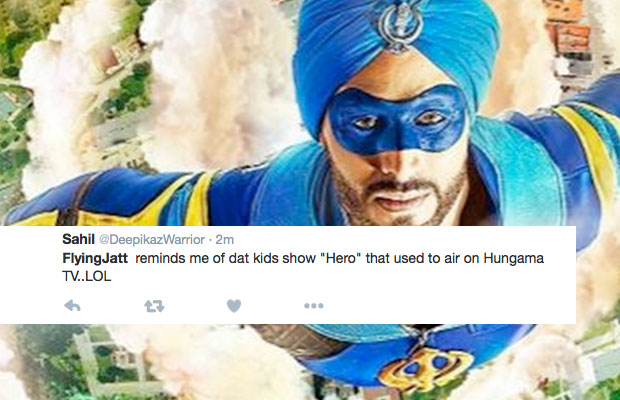 [tps_footer]Remo D’Souza has successfully landed in the field of direction. The filmmaker is now coming up with a super hero flick ‘A Flying Jatt’. The film stars Tiger Shroff and Jacqueline Fernandez in lead roles. The teaser of the film has released after the motion poster.

With animations and effects too the teaser is not looking polished. The fans were excited to witness the teaser of ‘A Flying Jatt’ but are not too pleased with the same. Many people expressed their comments about the teaser on the video sharing platform YouTube.

Here is what fans think about the teaser

“This happens when you overwatch Sasural Simar ka ! #RIP”

“ In the time of avengers … Seriously?? They don’t have the budget for a good superhero movie and it looks b grade…. Would one watch this film as same ticket price as Hollywood flicks… Don’t think so”

“What the hell is this? D grade VFX + Tiger shroff a superhero??? Seriously. Thumbs Down to the Makers”

@iTIGERSHROFF flying jatt thumbs down this time brother, this will be your first average or flop movie

Not so brave enough to watch Flying Jatt’s trailer.

A Flying Jatt’s teaser is outstanding. Amazing how one movie can make Hindi cinema look like it never evolved. Please don’t release this.