Varun Dhawan falls into trouble for expressing his love for Remo D’Souza on Twitter.

Bollywood actor Varun Dhawan is known for his kind and expressive nature. The actor speaks his mind and heart out when it comes to complimenting his friends from the industry. Varun Dhawan recently did the same but unknowingly fell into trouble. An innocent tweet from his end landed him in trouble.

Recently, Shah Rukh Khan appeared on Dance Plus Season 3, which is being judged by choreographer turned director Remo D’Souza and his team. The episode was fun, full of dance and filled with lots of memories. The episode saw SRK walk down the memory lane with heart touching tributes by Remo D’Souza on actor’s popular songs.

Varun couldn’t stop himself from expressing his view on the episode and out of sheer love for his favourite Remo he tweeted, “Dance Plus definitely has the best live dance acts on TV. Superb.” 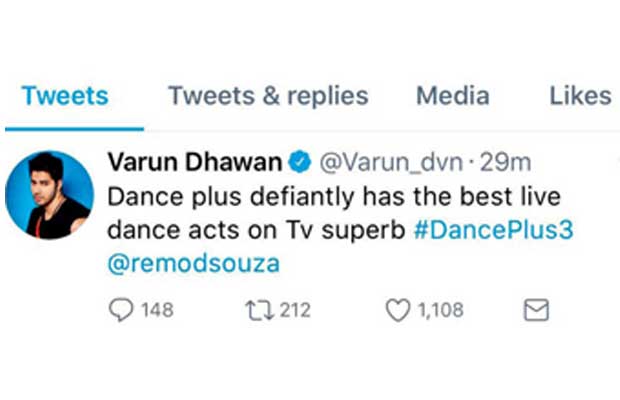 Varun, who has worked with Remo in ABCD 2, was forced to delete the tweet. Yes, as reported by Mid-Day, Varun Dhawan deleted the above tweet in an hour. As reported by the tabloid, Varun was asked to pull down the tweet by the publicity team of Sony SAB.

Yes, Varun Dhawan is a brand ambassador of Sony SAB and he is not supposed to promote or praise the show of a rival channel that airs on Star Plus. The source quoted in the report says, “It was a clear case of clash of interests. Varun did it with honest intentions, without thinking of consequences. But, it didn’t go down well with Sony.”

Meanwhile, Varun Dhawan is back in town after wrapping up the shooting of his next Judwaa 2, which stars Jacqueline Fernandez and Taapsee Pannu.