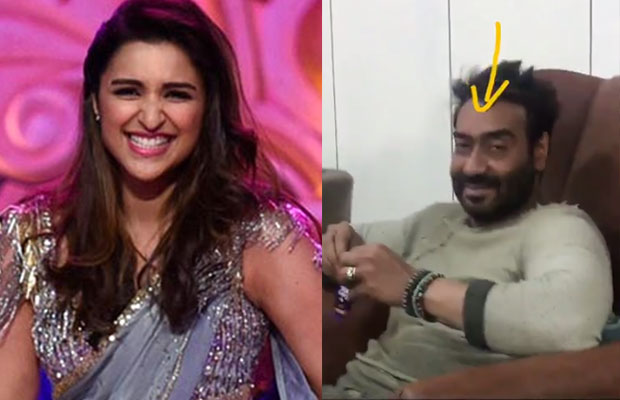 The fourth installment of Rohit Shetty’s laughter riot Golmaal series, Golmaal Again, is in its shooting schedule right now. The ensemble for the film has upped the bar and promises more fun than before. With Ajay Devgn, Tushar Kapoor and Arshad Warsi reprising their roles, the new editions in this installment are Tabu and Parineeti Chopra.

Parineeti Chopra likes to keep her fans in loop and she shares updates from sets of her films. She is doing the same from the sets of Golmaal Again. She clearly seems to enjoy every bit of it. She has said it several times that she loves being around her co-stars Ajay, Johny Lever and others who seem to be making work too exciting for her.

Parineeti has some off the record and post the shoot videos for us and this one is hilarious. In a video she shared, we see Pari and other cast watching an old song of Ajay from his movie Yeh Rasste Hai Pyaar Ke. Neither is it one of the best of Ajay’s film nor is he a great dancer and seems like he knows it! The ‘Shivaay’ actor’s expressions say it all. He is completely embarrassed, so much so, that he isn’t even looking at the television screen.

Seems like the prankster got pranked here! Ajay Devgn is known to be a silent prankster, but seems like he found his match and now he is the target.

Pari is also busy promoting her upcoming film, Meri Pyaari Bindu, which marks her debut as a singer too. It also stars Ayushmann Khurrana.