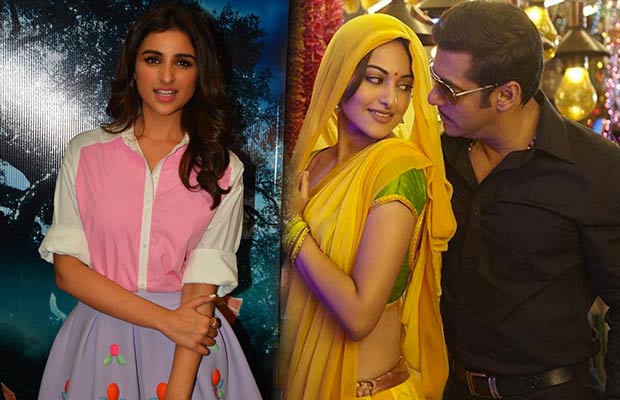 [tps_footer]The third installment of superhit franchise, Dabangg, is in the scripting stage and the speculations regarding the casting of the film are doing rounds already. Since few days, speculations are doing rounds that Sonakshi Sinha will not be a part of the franchise. Yes, reportedly the makers of Dabangg 3 are in search of new Rajjo and it is said that none other than actress Parineeti Chopra might step into her shoes.

Reports suggested that Parineeti Chopra might be the new Rajjo for the film. Though there has been no official confirmation about the same, it was said that Arbaaz Khan is keen in approaching Parineeti for the film opposite Salman Khan.

Well, there is no truth in it. Parineeti Chopra in an interview with a leading portal revealed that she is clueless about it and that if she gets a chance to be a part of Dabangg 3, she would definitely love to do it.

Well, Sonakshi Sinha has been a part of the two installments of Dabangg and her role has been loved by the audience, now it remains to see if the makers of the film replace the actress or no.

On a related note, the ‘Ishaqzaade’ actress will also be seen in Akshay Roy’s upcoming directorial ‘Meri Pyaari Bindu’ opposite Ayushmann Khurrana.[/tps_footer]