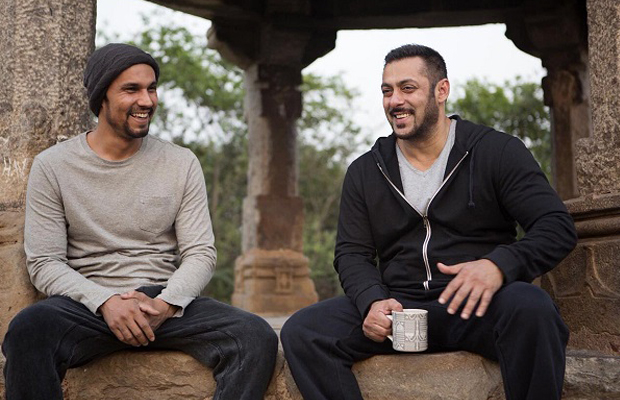 [tps_footer]Randeep Hooda is currently riding a wave of popularity and love from audiences after his scintillating performance in ‘Sarabjit’. The actor has been wowing us with his films for quite a while now and if his recent hits are any indication, he’s not going anywhere soon. Salman Khan, on the other hand, is one of Bollywood’s reigning Kings for decades now and has one of the largest fan followings in the country. His movies are known for their ‘larger than life’ grandeur and plots but are loved more than anything by the masses.

Well, for fans of these leading men the best news is that they both will be seen sharing screen space in the upcoming flick ‘Sultan’. The movie which is also one of the year’s most awaited films is directed by Ali Abbas Zafar who recently took to Twitter to share a cute candid picture from the film’s sets. The filmmaker shared a picture that shows Randeep Hooda and the film’s star Salman Khan sipping a cuppa on what we assume is their coffee break. Well, apart from the fact that they both look insanely amazing for their age, it also looks like the two enjoy an enviably close relationship even off screen.

The film has been generating a lot of buzz on social media and among fans right from the first look was released. When the trailer of the film released, it quick gained a lot of views and the rumors and excitement surrounding the film only tripled. The film is expected to do well at the box office as any of Salman’s films and has Anushka Sharma and Amit Sadh in key roles.[/tps_footer]