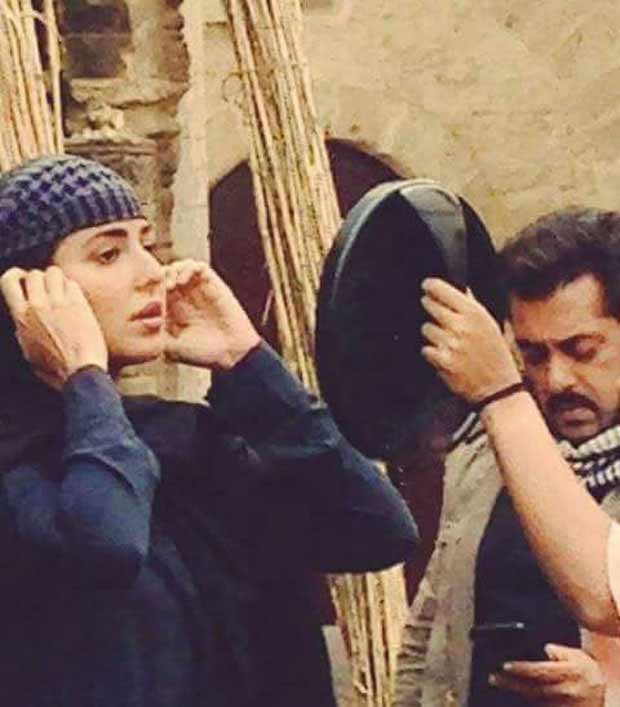 Salman Khan and Katrina Kaif are currently working together in the film Tiger Zinda Hai.

The Bollywood actors Salman Khan and Katrina Kaif are one of the most loved on-screen couples when it comes to Hindi movies. Their fans have been missing the lovely duo for a long time. They were last seen together in the film ‘Ek Tha Tiger’ back in the year 2012.

But to their delight, they have again teamed up almost after six years for Ali Abbas Zafar’s ‘Tiger Zinda Hai’. We have earlier shown you all many stills from the sets of the film. But there is another click from the sets that has recently surfaced online.

In the click we can see the superstar Salman being busy on his phone. On the other hand, the actress is seen fixing her hijab for the next scene to be shot.

Talking about Salman Khan’s work front, he was last seen in the Eid release ‘Tubelight’, which performed average at the box-office. His next release is going to be Tiger Zinda Hai with Katrina Kaif. Directed by Ali Abbas Zafar, the film is going to be packed with fiery action sequences. It is slated to release on December 22, this year.

Apart from this, the actor is also going to be a part of Remo D’Souza’s dance film, which also stars Jacqueline Fernandez.

On the other hand, Katrina Kaif was last seen with Ranbir Kapoor in the film ‘Jagga Jasoos’ which released on July 14, this year. Post Tiger Zinda Hai, she will be shooting for Anand L Rai’s next alongside Shah Rukh Khan and Anushka Sharma.

She is also a part of Aamir Khan’s ‘Thugs Of Hindostan’. The film also stars Amitabh Bachchan and Fatima Sana Shaikh in pivotal roles.