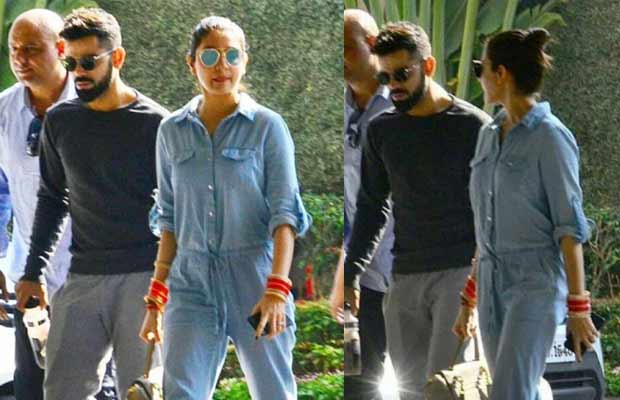 Virat Kohli and Anushka Sharma returned to Mumbai from New Delhi on Friday for their second wedding reception!

The Bolly-cricket couple Anushka Sharma and Virat Kohli had a very hush-hush marriage in Tuscany, Italy. And now they are throwing wedding receptions in India for all their relatives and friends who could not be a part of their celebration.

Today the couple is going to host a lavish party in Mumbai for all their friends from the film and cricket industry. The venue of the grand event is St. Regis in Lower Parel. The 800 square foot pillar-less Astor Ballroom will see the presence of the who’s who of the tinsel town.

The bash is scheduled to begin at 8:30 PM with the Arabian Sea providing a beautiful backdrop to the gala. But the couple has already left for the venue so that they can be there on time to welcome their guests.

Another reception party was held in New Delhi on December 21. It had become a grand affair as the Indian Prime Minister Shri Narendra Modi had come personally to bless the newly married couple. The reception was also attended by Kohli’s cricketer friends Suresh Raina, Gautam Gambhir and Shikhar Dhawan.

Post today’s reception, the lovely couple will fly to South Africa to welcome the New Year together. After which Virat will continue with his cricket series. And the actress will return to Mumbai to resume her film shoot for Aanand L Rai’s untitled film, which stars Shah Rukh Khan and Katrina Kaif. Anushka will also start shooting for the film Sui Dhaga with Varun Dhawan.