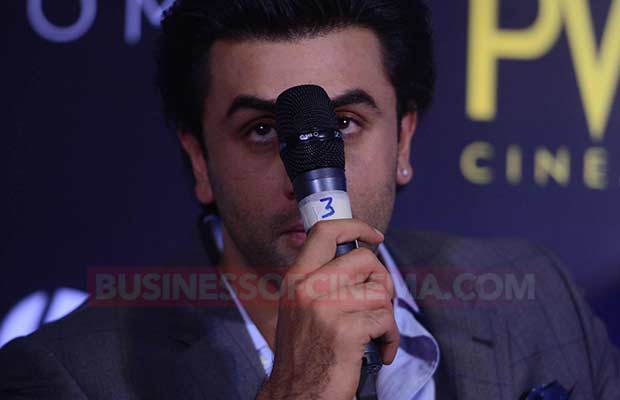 The Bollywood heartthrob, Ranbir Kapoor, attended an event today March 20th, 2017 in Noida. He was there for the launch of a new PVR Lounge – The VR Lounge.

When asked from a reporter about his other tie-ups with similar multiplexes and entertainment houses, the actor laughs and says that he is a very tech-savvy person. Ranbir also informs people about the new monochrome camera that he owns which clicks only black and white pictures.

Ranbir, towards the end of the press conference, gives out a very important message to all the media and entertainment houses saying, “All this technology and science and entertainment that you all talk about and keep pushing the envelope trying to entertain and engage the consumer and the audience, just put out a message that it’s really important that you have human-being time… spend time with each other, ask your kids to go out, play some real sports. Talk to them and don’t just get consumed by electronics and all of that”.

The actor looking pretty handsome in his grey suit combined with a sky blue shirt, is coming up with his much-awaited release Jagga Jasoos. He is also working on Ayan Mukherji’s Dragon and Sanjay Dutt’s biopic titled Dutt.