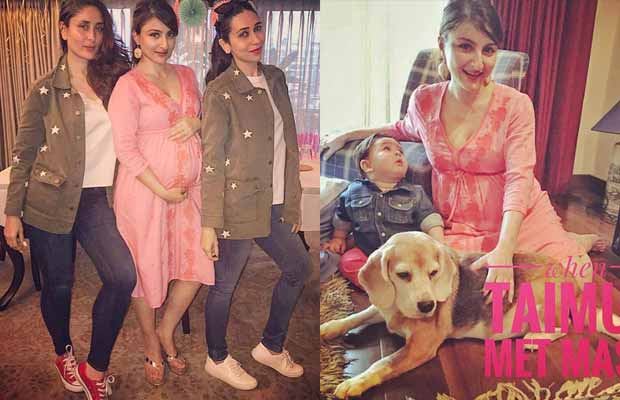 The Bollywood couple Soha Ali Khan and Kunal Kemmu are very soon going to become parents. The actress is pregnant and expecting her first baby with the actor.

And as the ritual goes in our country, there was a baby shower function for the future mother. The function was attended by the star ladies like Neha Dhupia and Konkana Sen. Also, the actress Kareena Kapoor Khan attended her sister-in-law’s baby shower with sister Karisma Kapoor.

Soha has shared some of the pictures from the event and she just looks adorable. The actress had adorned a simple but beautiful peachish-pink dress, with her hair pulled up in a pony tail. The would be mother was looking mesmerizing.

Also the B-town actresses  Kareena and Karisma were twinning in same jackets. Both of them were wearing a white top paired with blue denim. They were also seen wearing army green jackets with stars embedded on them.

Sharing the picture of the gang who attended the baby shower, Soha writes, “Thank you all for showering me with so much love #babyshower #babymonsoon”

In another one, where just the actress is posing, she writes, “Blessed @nine_maternitywear”

And finally sharing the picture of the one with her sister-in-law Kareena and also Karisma, she writes, “Caught between the queens of the fashion police.”

Talking about the couple Kunal Kemmu and Soha Ali Khan, they have worked together in films like 99, Dhoondte Reh Jaoge, Mr Joe B Carvalho and Go Goa Gone. They were in a live-in relationship for years. And it was after dating each other for a long time that the two of them finally got married in the year 2015.