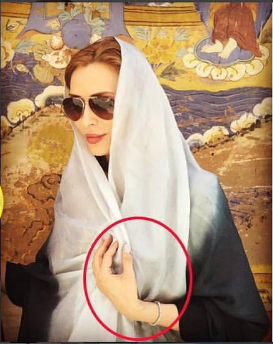 The shoot of the film Tubelight has already started in the locations of Ladakh. Recently they announced the actress of the film that is Chinese actress Zhu Zhu who will be debuting in Bollywood for the first time. We have come across many buzz while Tubelight crew was filming. Yesterday we got our hands to a wonderful picture of Salman Khan with Dalai Lama. Have a look how Dalai Lama and Salman Khan are smiling seems they mingle very well.

Though the actor is in Ladakh for the shooting of Tubelight he made sure he utilized the time by doing some activities whenever he was free. Salman Khan was also involved in some charitable work he helped the natives with his Being Human perks. He was also clicked at a hospital as he helped an organization and doctors by providing free heart treatment to all the needy kids. Then now he took out some time and decided to meet the spiritual leader Dalai Lama. It is an honour for anyone to meet Dalai Lama. And Salman Khan must have felt a lucky one to meet this spiritual leader.

It is reported that not only Salman Khan but his rumoured girlfriend Iulia Vantur  too was present to meet the spiritual leader Dalai Lama. Iulia Vantur can be seen with a duppatta  on her head we can guess that these two celebrities met Dalai Lama for his blessings. Rumours are rife that Salman Khan and Iulia Vantur are getting married in this year end. Looking at these pictures we can assume that the lovebirds Salman and Iulia have got their blessing from the divine Dalai Lama.

Directed by Kabir Khan, Tubelight starring Salman Khan and Chinese actress Zhu Zhu will also feature Sohail Khan as a special appearance and the film is slated to release on Eid next year.