Shahid Kapoor and wife Mira Rajput are the talk of the town with their cute daughter Misha who are off for their first international vacation.

The ‘Rangoon’ actor revealed at the Big Zee Entertainment Awards 2017 function that he has special plans for Misha’s first birthday. Shahid stated that “We are not probably going to be in the country, so we are going to get some family time around that time.”

And it looks like all the schedules have been cleared off for the trip. There are chances of a birthday party back in the city later on for family and friends in the industry.

Actor Shahid Kapoor shared a picture of the trio off on their family vacation on his Instagram with the caption, “First family vacay. And we are off. ??”

First family vacay. And we are off. ??

Shahid Kapoor and Mira Rajput were spotted recently at the Vogue Beauty Awards 2017 and couldn’t keep their eyes off each other. He shared a picture of the two on the red carpet with the caption, “Vogueing it. With my sunshine.”

Vogueing it. With my sunshine.

The couple is seen dressed causally ready for their international trip. We still don’t know where the family is headed to but we hope they keep us posted with cute pictures via social media.

Shahid Kapoor will be seen as a lead in the historical movie Padmavati’ with actress Deepika Padukone and ‘Befikre’ actor Ranveer Singh which will release next year. 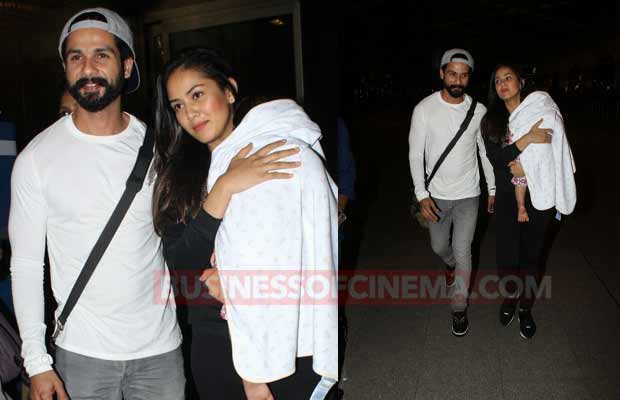