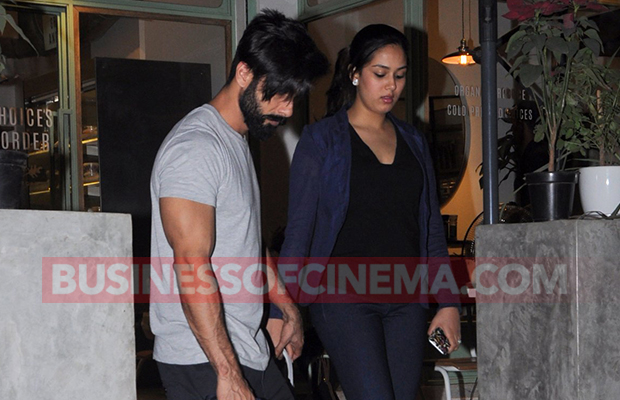 Bollywood actor Shahid Kapoor, who is busy working on his next Padmavati, was recently spotted taking his wife Mira on a movie date. Though he is busy with the promotions of Rangoon and also with his next film Padmavati, nothing is stopping him from spending some precious time with his wife. The actor was spotted on a dinner date again with his lovely wife, Mira Rajput. The two were spotted exiting from a restaurant in Bandra, Mumbai on Monday night.

Shahid Kapoor looked charming in his best casual look while Mira too looked pretty in her casual style. The two make an adorable pair and we just can’t stop gushing about them.

On the work front, Shahid Kapoor has geared up for the release of his upcoming film Rangoon, starring Saif Ali Khan and Kangana Ranaut alongside. The actor has also begun with the shooting for Padmavati, which is his first collaboration with director Sanjay Leela Bhansali. SLB’s historic film Padmavati features Deepika Padukone as queen Padmavati opposite Shahid Kapoor, who will be seen as her husband, Ratan Singh. Ranveer Singh portrays the character of Alauddin Khilji in the movie.