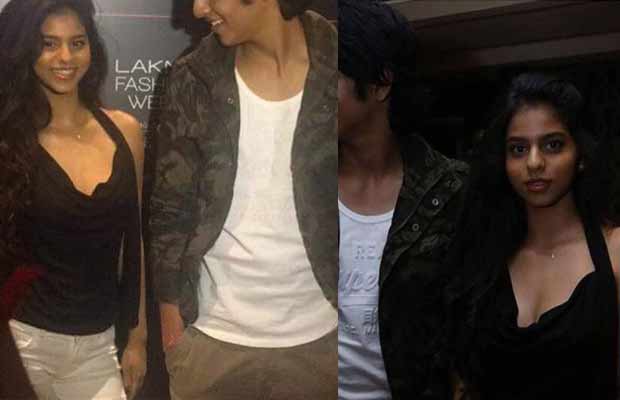 Lakme Fashion Week has been a completely stunning event this year. Many celebrities have popped in to support their favorite designers and creators in the fashion world. But quite a few regulars were missing from the scenes. Kareena Kapoor Khan also decided to ditch this year’s fashion week. With no usual, the fashion week was less known until these star kids gave everyone a surprise. Suhana Khan, daughter of Bollywood actor Shah Rukh Khan was seen on the red carpet! And she brought along a date!

The young girl was spotted with close friend Ahaan Pandey at the event. Now let’s not assume things, because the duo is part of a bigger group. Ahaan Pandey is from Suhana’s group of friends and is usually spotted together at parties and events.

They were also present at that unfortunate incident when Suhana Khan was surrounded by the media with no escape. The teen was exiting from a suburban theatre after seeing ‘Tubelight’ when she was caught by paparazzi in an awkward situation. Ahaan was there with her and others for that evening as well.

Even on the red carpet, the two friends were seen laughing as they shared a joke. Suhana looked beautiful in a black top with a deep neckline while Ahaan Pandey looked like a cool kid.

Ahaan Pandey is probably used to these events since he is a model. He had walked the ramp for Nandita Mahtani last year at the Beetle’s Tech Fashion Tour. Ahaan Pandey looked drool worthy in a white pan and suit jacket with some abs to increase temperatures.

Ahaan Pandey is definitely not camera shy and could very soon make his Bollywood debut as the new star kid. On the other hand, Shah Rukh Khan has also stated Suhana’s growing interest in movies.

We have to admit, Suhana Khan and Ahaan Pandey do look cute together. Maybe the two star kids will make their debut together into Bollywood.