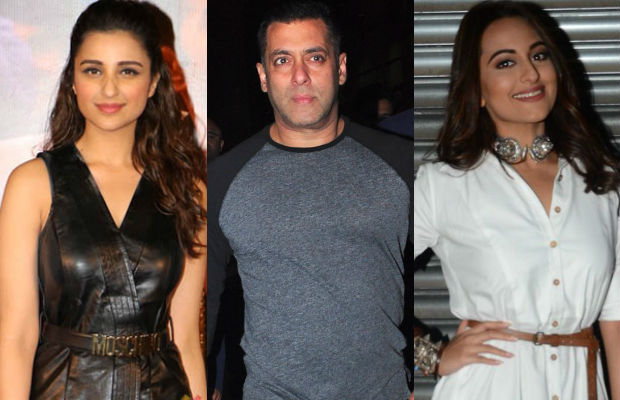 [tps_footer]Bollywood actress Sonakshi Sinha, debuted in the industry opposite Salman Khan in Dabangg. Since then the actress has been addressed as the Dabangg girl of B-town. Her role as Rajjo in the film was loved by the audience and so she also went on to star in the film’s sequel, Dabangg 2.

After a successful performance in Dabangg and Dabangg 2, it is said that Sonakshi, who played the role of Robinhood Pandey aka Salman Khan’s wife in the first two films, will not be a part of the film. Yes, speculations were doing rounds that Sonakshi would not be the part as a female lead in the film as makers of Dabangg 3 are keen to approach Parineeti Chopra.

Reportedly the reason why the actress has been dropped from the third film is said to be over an alleged conflict with Khan. So the makers of the film are planning to replace the actress with Parineeti Chopra. However, when Parineeti was asked about it, she revealed that there is no truth in these reports and that if she gets a chance, she would definitely love to do it.

Well, we have seen Sonakshi Sinha as Dabangg girl and we would definitely love to see her again in the third installment of the popular franchise. In fact, with Dabangg, Sonakshi made her Bollywood debut and this film not only earned her public acknowledgment but also a Filmfare Award for Best Female Debut.

Well, we took a poll on Twitter for our BusinessOfCinema.com readers asking if Parineeti Chopra should replace Sonakshi Sinha in Dabangg 3 or no. Well, our readers have expressed their choice and here’s the poll result. 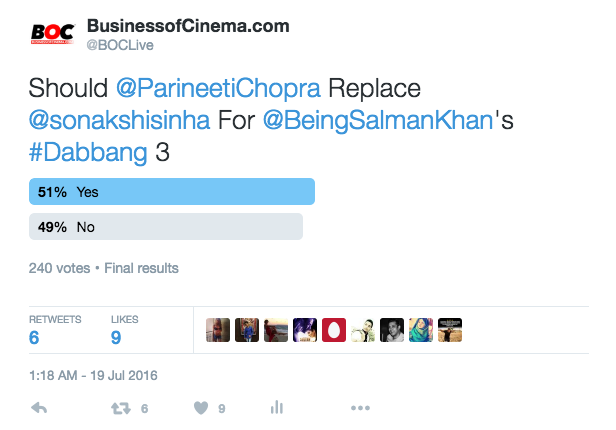