Actress-turned-director Pooja Bhatt took to micro-blogging website Twitter to reveal that a man has been posing as her agent and taking money from multiple event company on her behalf.

The 44-year-old filmmaker says she is “horrified” by this incident and plans to take police action against the man named Prashant Malgewar from Solitude Lifestyle Inc.

“Horrified that a man called Prashant Malgewar-Solitude Lifestyle Inc is masquerading as my agent and taking funds from event co’s on my behalf,” Pooja tweeted. 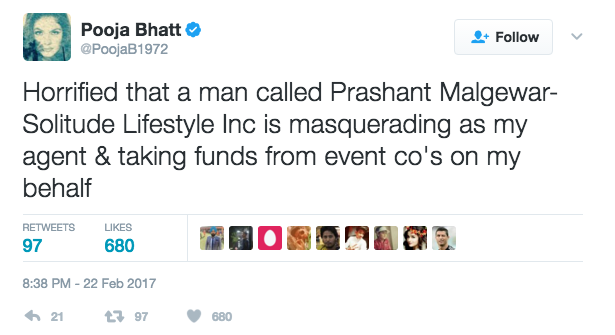 She added: “This is a very DANGEROUS trend. Strict action needs to be taken against Prashant Malgewar(Soulitude Lifestyle Inc) as this amounts to FRAUD.” 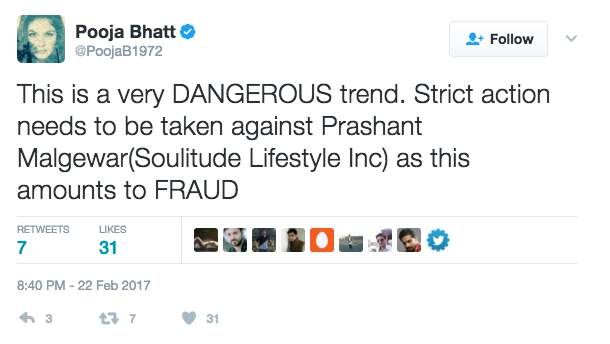 “Prashant Malgewar is NOT my agent or representative. He is a fraudster who needs to be booked for claiming he does.” 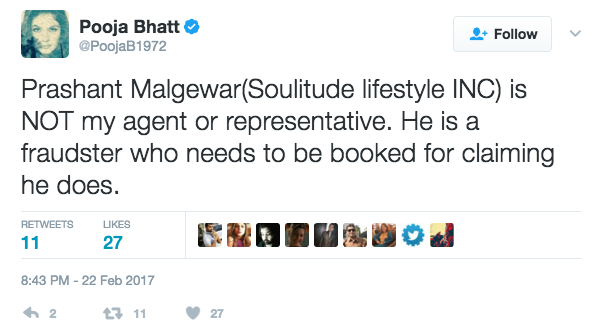 She also expressed shock over how reputed companies could trust him without him producing enough evidence of him being link to Bhatt in form of a signed contract or something other piece of document. “A man walks into a reputed event co’s office, claims money on my behalf & no-one there asks for authentication or a signed invoice from me?” she was on a Twitter rampage. 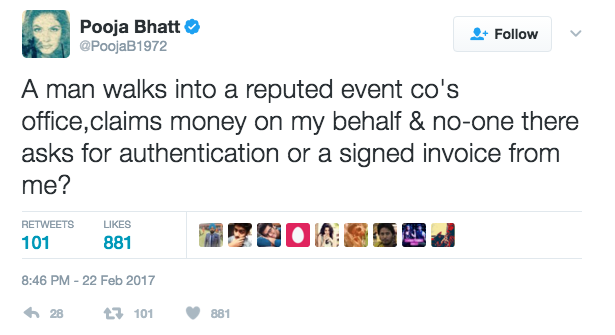 And then she finally declared that she is going to initiate a legal action against the imposter by filing a complaint with Delhi and Mumbai Police. “Have to file a complaint against Prashant Malgewar (Soulitude Lifestyle Inc) New Delhi with both Mumbai Police and Delhi Police for fraud,” Pooja tweeted. 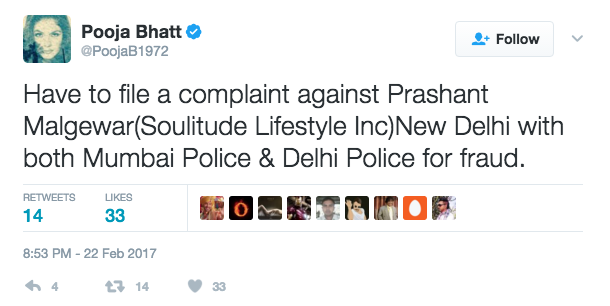 Pooja Bhatt is currently involved with her upcoming romantic dance film, Cabaret. Produced by Bhushan Kumar and Pooja Bhatt, Cabaret also features former cricketer Sreesanth and actor Gulshan Devaiah. Right now, the film is waiting its release due to a tiff between T-Series and Pooja.