Bollywood superstars Shah Rukh Khan and Aamir Khan are seen chilling out together these days. Last month, SRK and Aamir Khan’s first selfie taken in the 25 years of their friendship, had taken social media by storm. Fans went into a tizzy after seeing SRK and Aamir Khan’s surprising bonding. We often see Salman and SRK meeting each other. It’s not very often you see Aamir Khan socializing with his old friends.

Now again, Shah Rukh Khan and Aamir Khan had a small get-together. The Dangal star recently visited SRK’s Mannat bungalow. Looks like he visited to wish a good health to Raees star who has recently gone through his left shoulder surgery. Also spotted in the pictures is Netflix CEO, Reed Hastings. SRK and Netflix had joined hands last year and it seems they are bonding with each other over work.

Moreover anything, it’s surprising to see Aamir Khan and Shah Rukh Khan suddenly bonding with each other after keeping their friendship away for years. The two are coming together for a campaign for the internet-based entertainment company Netflix. Shah Rukh and Aamir were seen posing with Netflix CEO Reed Castings. So that’s why Salman Khan was missing.

Shah Rukh Khan took to twitter and posted this:

The Twitter account of Netflix India shared the picture with the caption: “Saturday night got pretty Khantastic!”

Last month, putting all the rumours to rest of having a tiff with each other, Shah Rukh Khan posted a cool selfie with Aamir Khan on Twitter and the broke the Internet. SRK tweeted the selfie picture with a caption, “Known each other for 25 years and this is the first picture we have taken together of ourselves. Was a fun night. 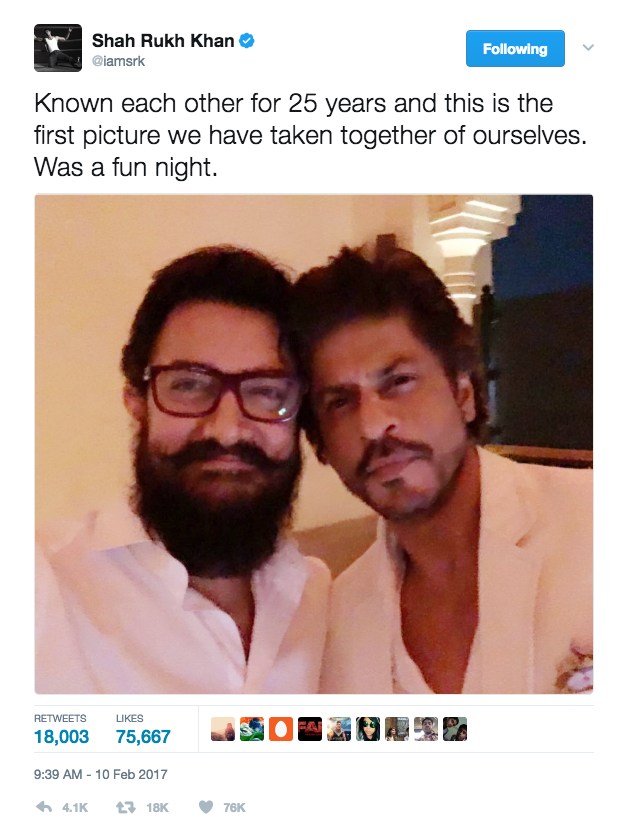