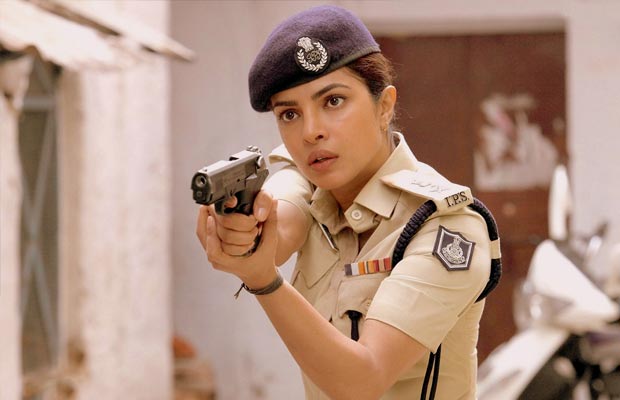 [tps_footer]Priyanka Chopra winning hearts endlessly for her work both, in India and the West. She is a thorough professional and has managed to nail down every project brilliantly that she has been a part of. Currently, too occupied with work in the West after Quantico success she has bagged season two of the same series and a Hollywood movie Baywatch opposite Dwayne Johnson a.k.a The Rock. And her killer appearance at the Oscars, still making people “Google” her again and again. Hahaha.. This is just the start of Peecee’s career in Hollywood and it already feels like she was born to be an international star.

Even after being so busy in the West she still managed to do Prakash Jha‘s next Jai Gangaajal a sequel to his hit Gangaajal starring Ajay Devgn. In this movie’s trailer, Priyanka Chopra is seen hitting all the baddies and desi goons with lathi in her hands. Warrior Princess is ready to take over Indian box office again !! Watch out Bebo, Katrina, Shraddha and all the B-Town ladies.

Here is what Priyanka said about her role and about her thinking as a person. She said, “Don’t judge me because I am a man or a woman…judge me for my job” this is what Abha her character believes in as much as Priyanka does in real life too. She was spontaneous throughout the interview and revealed the fact, that in today’s times the law breakers have increased and there are a lot of incidents which will prove how casually police officials are taken and the way right from police to ministers to public, taking “laws” for granted is a vicious disease and how it can be curbed down.

Priyanka feels that women’s contribution as a police officer gets less recognition in the system too as people are solely of the belief that only a man can punch and kick and that females can’t fight. Well !! Have you people seen catfights ? Morning trains and ladies fights… Hahaha.. Who can be more Dabangg than that ?? We have Kiran Bedi, Sushma Swaraj, Hema Malini and many more women making a breakthrough in politics and changing the scenario of the world we live in and make it better for females.

Priyanka said “While researching for the film, I realised that women in the police force are not given as much credit as they deserve. A woman in uniform can pack a punch just as hard as any man. This is what the film stands for — the power of the uniform”

Well said Priyanka !! Now you are making us more curious to watch this film. More than your talent and beauty, girl it’s your guts and courage of always speaking your heart and mind out that makes us love you and respect you from the bottom of our hearts. What do you all say about this ???[/tps_footer]