Priyanka Chopra gets trolled by people as she might have got a nose job done!

The Bollywood actress turned international icon Priyanka Chopra is surely soaring high with her career. But the actress has not been having a really good time with the Indian fans.

It was just a few days ago when the Baywatch actress met the Indian Prime Minister, while she was on her trip to Berlin. She was shamed for wearing a short dress and sitting cross legged in front of the PM.

That controversy had not died and she fell into another one when she posted her selfies with her brother at the Holocaust Memorial. People were not happy with her because Holocaust Memorial has a big rule that it does not allow anyone to take selfies. One is strictly not allowed to take pictures there considering it a connection with such a grey accident.

And now the actress has been again trolled because of her another Instagram post. Priyanka just posted a selfie with the caption, ”Is it ok to be super excited about heading home?#mumbaikar.” The picture looked all fine, except for the actress’s nose which was looking a bit different.

Is it ok to be super excited about heading home?! ??????#mumbaikar

Her followers have started guessing that she has got a nose job done and hence have started trolling her for the same. 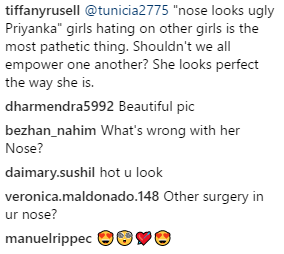 Earlier also, Priyanka had been reported to get several cosmetic surgeries done, but she had denied all such reports!

Cosmetic surgeries are nothing new in the Bollywood industry. Actresses like Kangana Ranaut, Kareena Kapoor Khan, Anushka Sharma, Shilpa Shetty, Sridevi and many others are believed to have gone under the knife to enhance their beauty.