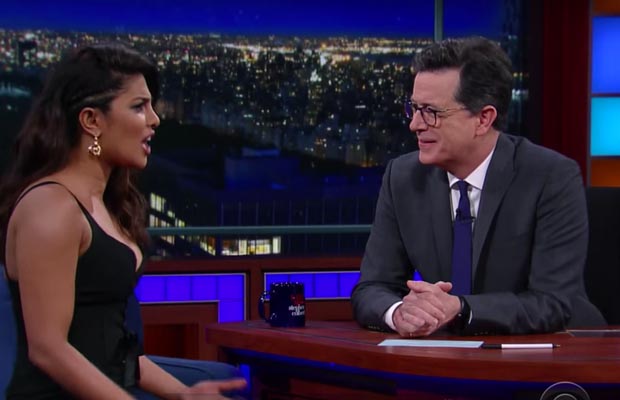 Priyanka Chopra nailed it at The Late Show with Stephen Colbert.

Bollywood actress Priyanka Chopra is an enormous star in India and in a short span of time; she has become a huge international star. She is one of the prominent Indian names, who has showcased her global presence. From being named in Time Magazine’s 100 most influential people to gracing Oscar awards. To debuting opposite Hollywood star Dwayne Johnson and what not, Priyanka Chopra is currently riding high on success.

As we all know, Priyanka Chopra has emerged as the most well-known Indian faces recognized in Hollywood and so, she has been appearing on too many American chat shows off late. After being on talk shows like The Tonight Show Starring Jimmy Fallon, The Ellen DeGeneres Show and Jimmy Kimmel Live, the actress appeared on another chat show of Stephen Colbert’s “The Late Show”.

And like always, she nailed it! The Bajirao Mastani actress had quite a bold and witty reaction that left the audience in splits. Knowing that she can be in trouble for what she says, Priyanka Chopra made a statement, “I’ve got to watch what I say. I’m here on a Visa.”

She also took a dig at her American accent while reminiscing the 4 years of schooling she did in the US. After spending 4 years in the USA and coming back to India, Priyanka would pronounce ‘coffee’ as cuwa-ey-fee and ‘sister’ as sis-ta-h. Interestingly, she laughed at her jokes without making it a big deal. She is definitely a rockstar!

Watch the video below of Priyanka Chopra talking with Stephen about moving from India to New York.