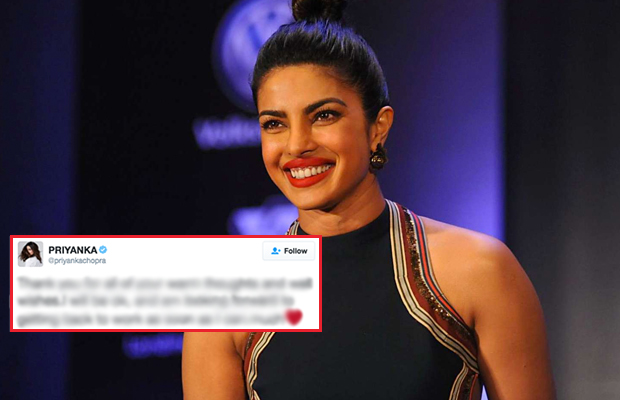 Priyanka Chopra’s character in ABC’s drama, Quantico has always emerged as the lucky survivor of terrorist bombings, kidnappings and some intense fights and battles. And Priyanka Chopra herself seems as tough. She had a nasty fall on the sets on her TV show Quantico.

After international sites began reporting that Bollywood’s desi girl had been hospitalised, the actress’ representative said in a statement: “Yes, we can confirm there was a minor accident and Priyanka will return to work after the weekend.”

On Sunday night, in a tweet, Priyanka assured fans she was recovering well and thanked them for their wishes. She also said she was hoping to resume work soon: “Thank you for all of your warm thoughts and well wishes. I will be ok and am looking forward to getting back to work as soon as I can.” 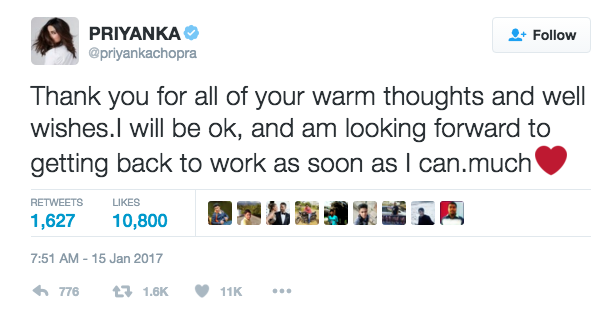 The 34-year-old star took a tumble while performing a stunt for her hit FBI TV series Quantico on Thursday night and was treated for concussion.

Quantico season two will be returning after a mid-season break from January 24, and would air on Star World and Star World HD.

Meanwhile, PeeCee is also gearing up for her Hollywood debut, film ‘Baywatch’. The film, which is adaptation of the 1990’s popular TV show of the same name, also stars Dwayne Johnson and Zac Efron.