[tps_footer]The “Mary Kom” actress is jet-setting an awful lot these days, and is probably one of the busiest bees in Hollywood.

On Sunday which was the day of the 2016 Oscars, PC’s red carpet look was worth a million bucks and put her on every “Best Dressed” list there was. She was reportedly going to the Vanity Fair after-party once the show was over.

After the event and the after-party, she rushed to Miami the very next morning to shoot for ‘Baywatch’ with Dwayne Johnson. PC reportedly had to change outfits in the airport bathroom before boarding her flight! The two have referred to each other as brother & sister on social media. As PeeCee jet-setted off to the beaches of Miami, to shoot for her Hollywood debut, she made time in between scenes to do satellite interviews for her newly released movie “Jai GangaaJal”. Johnson once said in an interview that Priyanka was “the biggest star out of India” and soon, “the world!”.

Putting her technology-fuelled work week into perspective, she shared an Instagram photo with the caption “Thank god got technology!”. She also shared a paparazzi picture of herself with three phones in hand. “Global careers need connectivity,” she said. 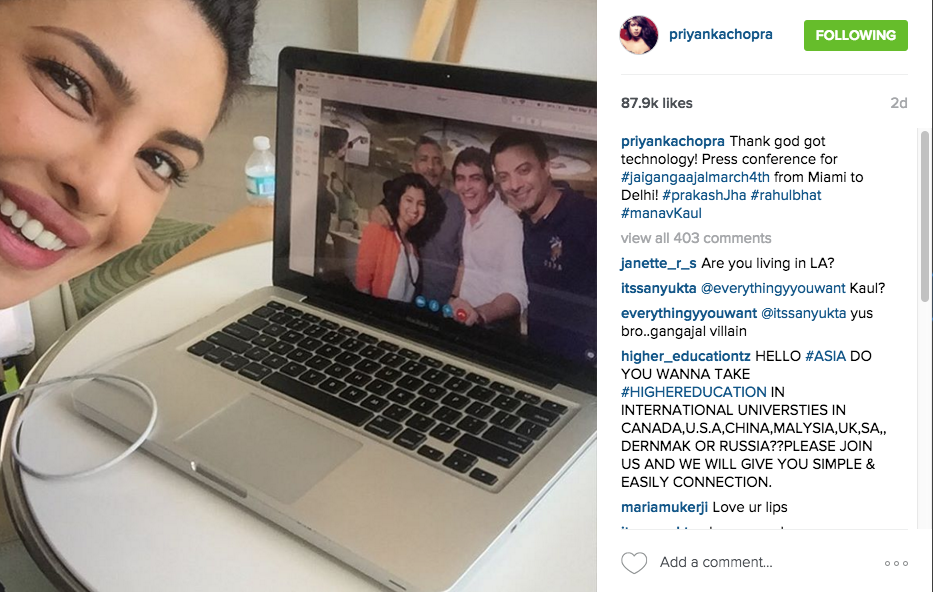 As one of Hollywood’s fastest rising and most in-demand stars, Chopra never stays in one place for long. The actress took to Instagram on Wednesday to announce that she had temporarily wrapped shooting in Miami and instructing her Baywatch co-stars to “play while I’m away.” However, Chopra did not head back to shoot for Quantico in Montreal, she instead traveled to New York to be on the Jimmy Fallon anchored “The Tonight Show”.

She took to Instagram to tag @jimmyfallon before the show. . Not only did the actress woo everyone with her charm, but she also nailed a wing-eating contest with Fallon.

And on Friday, she popped by Live! With Kelly & Michael to promote Quantico‘s return on March 6. Phew! It’s been one hell of a crazy week for PC![/tps_footer]