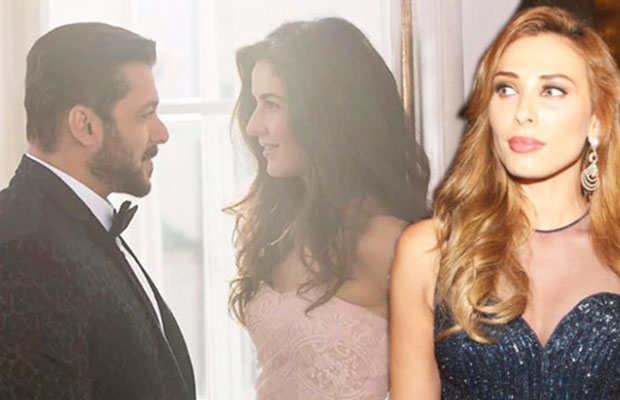 We all know Salman Khan and Katrina Kaif are back together for their upcoming film, Tiger Zinda Hai. The former couple recently completed the first schedule of the film in Austria, which is being directed by Ali Abbas Zafar.  Though the shooting of the film has just begun, it has already raised curiosity among the audience as Tiger Zinda Hai brings back the former couple on the silver screen after 4 years. Fans are very much excited about Salman and Katrina shooting together for the film.

However, it seems Salman Khan’s alleged girlfriend Iulia Vantur is not happy with the same and we have a proof. Remember Salman Khan’s sister Arpita Khan Sharma had also shared the first look of Salman and Katrina Kaif from Tiger Zinda Hai? In the adorable still, Kat and Salman are seen dressed to kill. Salman looked dapper in a tuxedo and Katrina looks stunning in a strapless pale pink gown.

Arpita had shared the picture with a caption, “They are back ! Gorgeousness at it best”. Well, Katrina and Arpita share a good bond and nothing has ever affected their friendship. Moreover, it is quite evident that she is very much exacted to see Salman and Kat back on the silver screen.

Coming to the most important point, as soon as Arpita shared this still of the former couple, Iulia Vantur unfollowed Salman Khan’s sister on Instagram. Yes, Iulia unfollowed Arpita. In fact, both are not following each other on the social media. Does this prove that Iulia is upset with Arpita after she shared Salman and Katrina’s picture? Is Iulia Vantur insecure of Salman and Katrina back together? It seems so!

This is not the only thing that had left Iulia angry and insecure. The Romanian beauty had also blocked all Salman Khan fans on twitter after they trolled her over Katrina spending time with Salman in Austria for the shooting of Tiger Zinda Hai. Salman’s proximity with ex-girlfriend Katrina Kaif is giving Iulia sleepless nights and that she is jealous of Salman giving too much importance to Katrina? Well, seems so!

Meanwhile, Katrina is back to Mumbai while Salman Khan is currently in Maldives with entire Khan family to celebrate nephew Ahil’s first birthday.