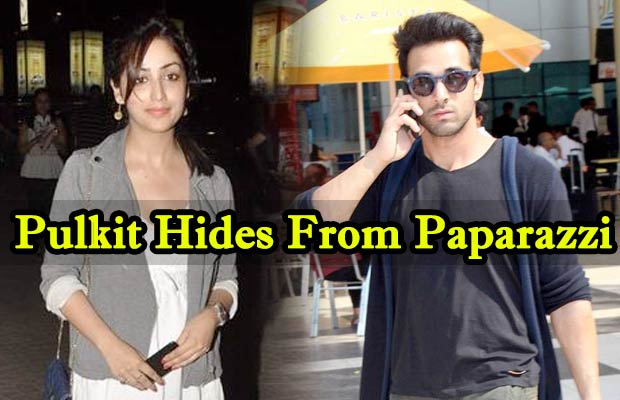 [tps_footer]Pulkit Samrat and Yami Gautam‘s alleged love affair has kept rumour mills abuzz since Pulkit separated from his wife Shweta Rohira. Reportedly, the secret lovebirds of B-town had recently taken off for a holiday and returned back to the city on Sunday afternoon. As they arrived in Mumbai airport on Sunday afternoon, Pulkit Samrat was in a shock to see a bunch of photojournalists waiting at the arrival gate.

Reportedly, as Pulkit spotted photographers, he immediately left in his car leaving Yami Gautam behind. The alleged couple wasn’t expecting paparazzi to be there and as soon as Pulkit saw photographers he ran toward his car to hide but well you know, nothing stays hidden from media and camera lenses. However, Yami looked chilled and calm despite photographers present.

According to a photographer who was present there, Pulkit Samrat and Yami arrived together at the airport but planned to move into their separate cars. Pulkit stepped in first and few minutes later Yami Gautam followed him. As Pulkit Samrat saw paparazzi he ran towards his car but it seems he couldn’t warn about media to Yami at the right time and she was caught coming out by the cameras.

Well, we wonder what makes them to hide from media when they are just friends, as said by them during interviews for their last film Sanam Re. It seems the lovebirds are in no mood to make it official![/tps_footer]