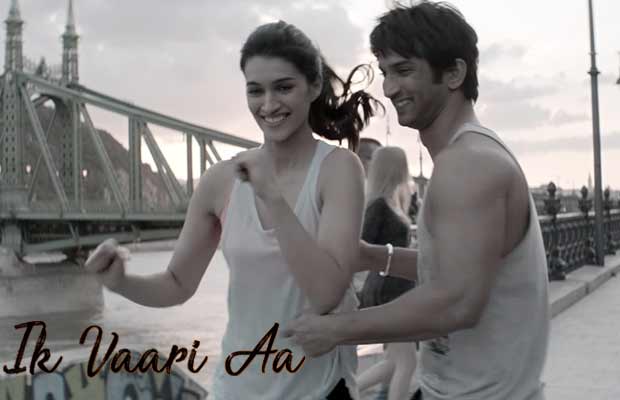 After the amazing trailer, the makers of Sushant Singh Rajput and Kriti Sanon starrer Raabta have released the first song of the film. While one still can’t get over their magical chemistry in the trailer of the film, the first song Ik Vaari Aa is another treat. The song is a ‘happy separation song.’ Yes, the minute when we hear separation, all we can think is a sad story. However, this song is entirely different, happening, peppy and not a painful track.

The first song Ik Vaari Aa has been sung by the much-loved singer, Arijit Singh, composed by Pritam and penned by Amitabh Bhattacharya. The beautiful song sees Sushant Singh Rajput who plays the role of Shiv and Kriti Sanon who plays the role of Saira spend their separation period by reminiscing the good times they shared together. Despite living separately, the two are attached to each other and is shown beautifully. Moreover, Sushant and Kriti look stunning.

Ik Vaari Aa is truly a magical song with exotic locations and is surely going top the playlist. It also teases you to wonder how this separation between Shiv and Saira will bring a twist in the story.

Kriti and Sushant play a cute, young couple, Saira, and Shiv in the film. The trailer showcased a romantic love story based on dreams and destiny of the young couple. Sushant Singh Rajput and Kriti Sanon are playing the protagonists whose love spans over two different eras. Of course, there’s a villain in the film.

Directed by debutant Dinesh Vijan and produced by Homi Adajania, Bhushan Kumar, and Dinesh Vijan, Raabta is all set to release on June 9, 2017.

Watch the first song here and share your review in the comments section below: