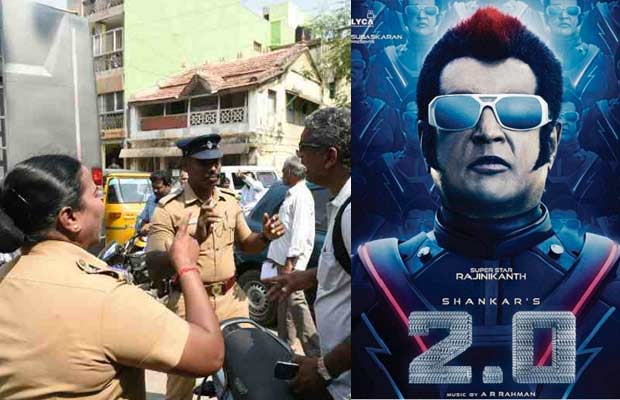 The crew of the film 2.0, starring Rajnikanth, attacks the photojournalists after they ask them a few reasonable questions.

2.0, the sequel of 2010 sci-fi blockbuster Enthiran, is one of the most awaited films of the year. The movie started coming into news after the famous Bollywood actor Akshay Kumar was cast in the movie for the role of the antagonist.

But now the film is in news for all the wrong reasons. Apparently, the film unit was shooting in a public place and had blocked a road in the peak hours, which caused inconvenience to the common people.

On being questioned about them blocking the road and if they have a permission letter, the photojournalists were beaten up by the crew of the film. “When we asked if it was proper to inconvenience public by blocking roads especially during (morning) peak hour, two crew members used foul language against us and we were beaten up,” the photojournalists told the news agency PTI.

Intervening in the matter, S Shankar, the director of 2.0, apologized to the victims and assured them that incidents like this would never repeat in future. Post the apology, the photojournalists have decided to withdraw the complaint that they had filed against the film’s production manager, a bouncer and the Director S Shankar’s nephew.

This is not the first time that media has been ill-treated by a film crew. A few days back, the bouncers on the set of Sanjay Dutt starrer Bhoomi, were in talks about manhandling the journalists and the common crowd.

Enthiran which was released in Hindi under the title Robot, has its sequel 2.0 releasing in Diwali, on October 18, this year.