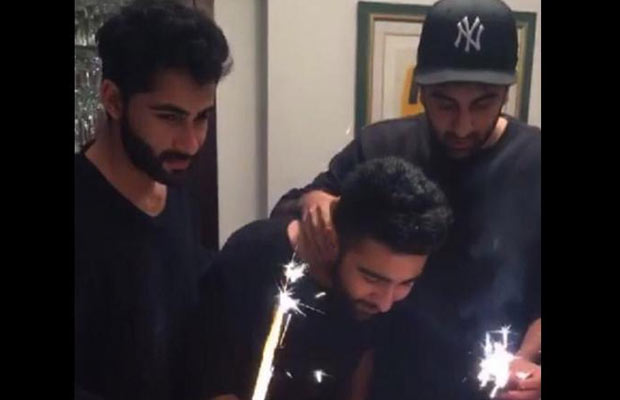 [tps_footer]Ranbir Kapoor the heartthrob of Bollywood who’s last release was Tamasha with Deepika Padukone and still he is maintaining to be in the news this year.

After his breakup with Katrina Kaif and his two big films releasing this year he was recently in the news as he danced with Ranveer Singh who is the present boyfriend of Ranbir Kapoor Ex Deepika Padukone. He was also in the headlines as his upcoming film Ae Dil Hai Mushkil will have Ranbir and Aishwarya Rai Bachpan licking chocolate off each other to which Bachchans are unhappy.

Ranbir Kapoor recently celebrated his cousin brother Aadar Jain Birthday. Aadar Jain is the brother of Armaan Jain who featured in his debut film Lekar Hum Deewana Dil. Ranbir can be seen dressed in casuals with a cap and holding candle in his hand. We too wish Aadar Jain a Happy Birthday.

On the work front, Ranbir Kapoor will soon be seen in the films Jagga Jasoos and Ae Dil Hai Mushkil.[/tps_footer]