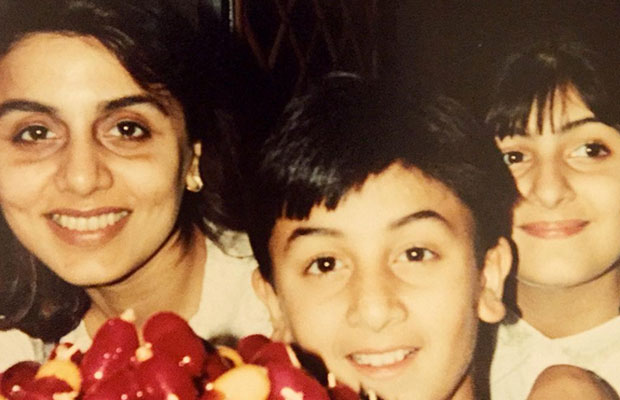 [tps_footer]Ranbir Kapoor is currently working on Anurag Basu’s ‘Jagga Jasoos’ starring Katrina Kaif, his alleged ex-flame and after Jagga Jasoos, Ranbir will start working with Ayan Mukerji’s superhero flick, starring Alia Bhatt. Although, on a professional front, Ranbir Kapoor didn’t have a good career phase. His much-awaited movies like Bombay Velvet, Roy, Besharam bombed at the box office badly and he was heavily criticized for his performances and selection of movies. Ranbir Kapoor started his acting career with Saawariya starring Sonam Kapoor, Salman Khan, and Rani Mukherjee, even this star-studded movie of Sanjay Leela Bhansali didn’t work out at the box office. But, nothing could decrease the fan following of this Rockstar Ranbir Kapoor and people still have hopes and high expectations from him.

Recently, we came across a picture of Ranbir Kapoor when he was a teenager. He proved he is a chocolate hero right from that young age and Kapoors are worldwide known for their contribution to the world of cinema but people also know they are blessed with good genes that make them look so gorgeous and picture perfect 24×7 like Kareena Kapoor Khan, Karisma Kapoor, Ranbir Kapoor and even their elders like Randhir Kapoor, Rajiv Kapoor, Raj Kapoor, Rishi Kapoor, Shashi Kapoor have been blessed with extremely good personalities and gorgeous looks. Ranbir is maintaining the legacy very well.

Check out this pic, where Ranbir Kapoor is sitting next to his uncle Rajiv Kapoor and papa Rishi Kapoor while attending a function. Soo cute !!![/tps_footer]