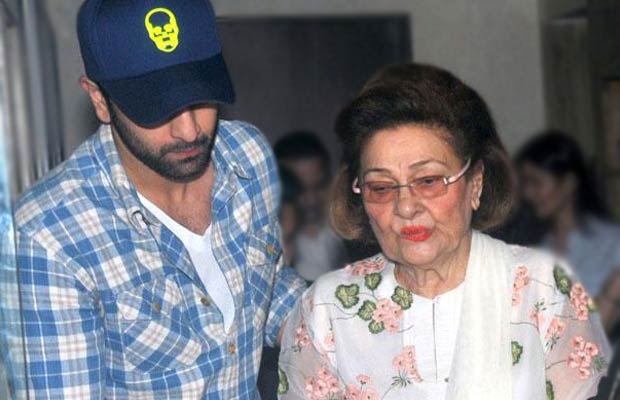 [tps_footer]Ranbir Kapoor’s grandmother Krishna Raj Kapoor is hospitalized as she complained of breathlessness. Randhir Kapoor officially stated that she is now stable and is likely to get a discharge tomorrow. Krishna Raj Kapoor had to be admitted after she complained of breathlessness and uneasiness. The doctors are monitoring her health closely and if everything goes well she will be home tomorrow.

The head of the Kapoor family also underwent a few tests and all the results have been normal. Raj Kapoor’s wife Krishna has been dealing with health issues since the start of 2016. She was admitted to the Breach Candy hospital in the month of February too.

It is being said that she is dealing with age related ailments which are not very serious until now. The senior celeb is known for her elegance. Krishna Raj Kapoor until now is seen at the family functions. Rima Jain, Randhir Kapoor, and Rishi Kapoor were beside her while she was admitted.

Ranbir Kapoor is also keeping a close watch on his grandmother. Reports state that her health is now fine and no complications have been reported by the doctors. She is currently on medication.