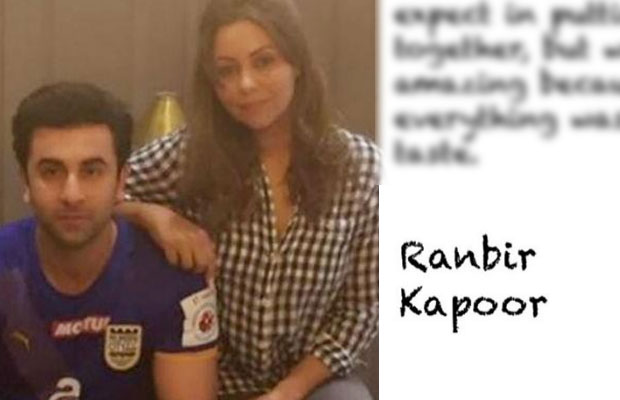 Ranbir Kapoor was living with his grand mother post break-up with Katrina Kaif. It has been three months that Ranbir has moved into his new house in Bandra.

The lavish house is designed by none other than B-town’s favourite designer Gauri Khan.

Gauri took to Instagram to share a note penned by Ranbir. He wrote, “It has been a very inspiring and enjoyable experience collaborating with Gauri. I didn’t know what to expect in putting my first home together, but working with Gauri was amazing because in an instant, everything was so personal and to my taste.”

Ranbir moved to his house in December and is named Vastu.

Ranbir’s father and veteran actor Rishi Kapoor expressed his joy by saying that he is happy about Ranbir Kapoor shifting to his house. Also, he quoted his warm greetings to Gauri by thanking her on Twitter. Daddy Kapoor said that Gauri has made a home out of Ranbir’s house. The interiors is beautifully done. He said he and wife Neetu Singh are overwhelmed.

Rishi further said that it is one of the most beautiful homes he has ever seen and he is personally thankful to Gauri for abiding to Ranbir’s choices and tastes. A source revealed that the house has a huge bedroom, a theatre and a huge space for two pets, an English Mastiff and a French Mastiff.

Along with Ranbir, is also close friend to Khans, director and producer Karan Johar. He said, “Gauri Khan doesn’t just create spaces, she creates dreams that unfold with a mastery and a modern brilliance. Her sense of aesthetic is unparalleled and individualistic.”