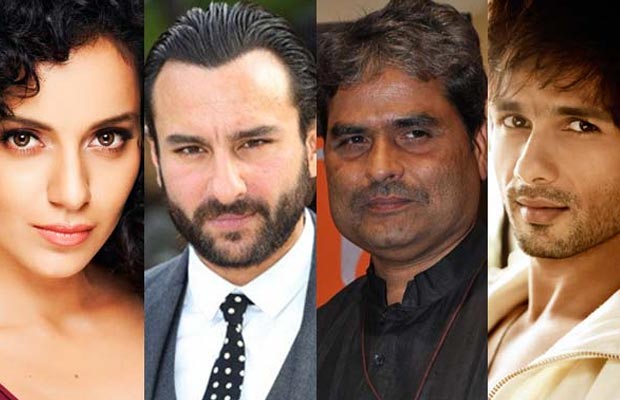 Rangoon starring Kangana Ranaut, Shahid Kapoor and Saif Ali Khan was initially supposed to release on September 30. But now due to reasons unknown, the film release date has been postponed to February 2017. Surely the fans of this trio must have been upset with Rangoon getting delayed, but it seems the actors are happy with the decision.

Kangana Ranaut, Shahid Kapoor and Saif Ali Khan are relieved as Rangoon is being postponed. The reason behind is that as Shahid Kapoor who is just one more month away to be a Father he wants to give his most of the time to his wife Mira Rajput as they are waiting to welcome their first child. If Rangoon was to be released in September 30 then Shahid had to fulfill the commitments of the film instead of fulfilling the daddy duties and so he is relieved that he can enjoy the fatherhood phase without any work commitments. Shahid Kapoor also celebrates his Birthday on 25 so he will be happy to share the joy of the much awaited film with his Birthday.

On the other hand, even Saif Ali Khan is happy with the decision because Kareena Kapoor Khan is expecting in the month of December and he wants to be with her and the newborn child.  Reports are that Saif and Kareena have flown to London for their babymoon and they want the baby to be away from the limelight. Wherein Kangana too is happy with Rangoon being released in February as she believes February is a lucky month for her. Kangana Ranaut’s blockbuster film Tanu Weds Manu released in February and so she is excited for Rangoon to release in February month.  According to the reports, the actors also state that they are relieved because they will get more time to work on the film.

Directed by Vishal Bharadwaj, Rangoon is a love story based in the 1940s in the backdrop of World War II. Let us see if waiting for this film do wonders at the box office.

Script: Rangoon directed by Vishal Bharadwaj was supposed to release on September 30. The latest update of the film is that it will be released in February next year. It seems the lead actors of this film – Shahid Kapoor, Kangana Ranaut and Saif Ali Khan are relieved to know Rangoon getting postponed to February 2017. Shahid Kapoor is all excited to welcome his first child as Mira Rajput is expected to deliver in September month. Even the Nawab – Saif Ali Khan waits for his newborn as Kareena is expecting in the month of December. Whereas Kangana Ranaut is happy with the release date getting delayed as February month holds a sentimental value to her. Let us see if Rangoon hits the blockbuster in February 2017.