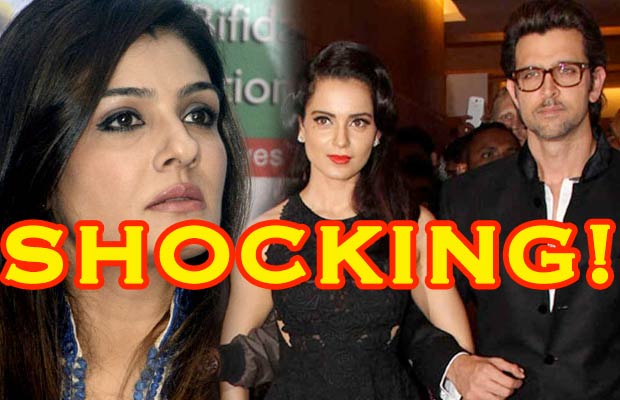 [tps_footer]Everyone saw the whole Kangana Ranaut – Hrithik Roshan controversy unfold over the past couple of months and undoubtedly Kangana had to face a lot of cat-cries and criticism. Some even called her ugly names. Though Kangana and Hrithik have decided to stop their mud-slinging and do it by the book and via proper legal channels, colleague Raveena Tandon has given us an inside picture of the whole controversy that shook Bollywood and its followers.

Constant in her support to Kangana in this fight, Raveena mentions that heroines have suffered far too much in the hands of their powerful male counterparts. Raveena mentions that most of the heroines might be secretly rooting for Kangana as they can identify with the fiesty actress, who had the guts to face it all and yet be calm about it.

Here are some excerpts from Raveena‘s column:

“I remember first seeing Kangana when she won the newcomers award at an award show in London many years ago, what really impressed me about her was in her acceptance speech , she humbly stated that I will speak in Hindi as my English is not so good. That statement from her won the audiences heart. She I believe, is someone who will tell the truth, and stand by it. Some do believe and I do too that intimate details about a relationship need not be made public as what happens between two people is for them to know and decide, who are we to judge? But it’s her choice to stand up and fight for if she does feel wronged and believes that she needs to get the truth out in the open .

The industry was and maybe is still a hero oriented where terms and conditions are dictated by super star male actors. But the slight shift is there for all to see. Much before my generation, in the 70’s some heroines were driven to paranoia and ultimately declare schizophrenics and written off. A gorgeous model actress was found dead after being labelled that and another beauty queen/model/actress was beaten up black and blue by a hero husband and his wife! She lost an eye and her career. In 90’s (my generation) the girls fought back but silently. If they spoke, either they were labelled pathological liars or as the macho heroes would show their bravado by threatening in the next glossy headline as how they would smash the girls face or bash her the next time they saw her or she spoke about them – whereas the girls would quietly pick up the pieces of their hearts and careers and try to let their work speak.

Most of the heroines I know secretly might be rooting for Kangana and identifying on some of the points that she’s made. If I applaud Kangana today, is not for that I have already judged who is right or in the wrong, just that it’s high time women find their voice, speak up, and get their due out there.”[/tps_footer]