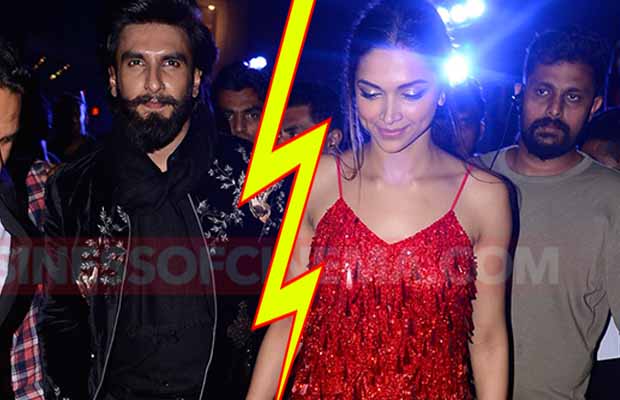 We reveal the reason why Deepika Padukone-Ranveer Singh have taken a break from each other.

That’s not all; they have even refused to speak about each other. This has left fans as well as media to speculate that Ranveer and Deepika are no longer together.

Deepika Padukone fuelled the speculations by sharing a picture of her with Ranbir Kapoor from the song Balam Pichkari on the occasion of Holi. The actress was reminiscing about her Balam Pichkari days with her ex-lover Ranbir Kapoor. But why did Deepika not share her picture with Ranveer Singh from their iconic Holi song Lahu Muh Lag Gaya?

Even at the recent event, Deepika Padukone was asked about Ranveer and the status of their relationship. The actress agreed to reporter’s question and said that she has broken up with her beau if the reporter is saying so.

Well, things don’t seem to be too well between Ranveer Singh and Deepika Padukone? Well, that’s not the case. A source close from the sets of their upcoming film Padmavati revealed to us that Deepika and Ranveer are maintaining distance for a reason and that the two are very much in relationship with each other since past 4 years. Yes, you read that right!

However, the makers of the film issued a statement and made it clear that there will be no love scenes in the film between Ranveer and Deepika’s character.
Despite that, recently, the state minister of Rajasthan had made it clear that the film will not be released in Rajasthan till it is shown to the Rajput community leaders. Well, in order to let the audience and the protesters believe that there will be no love connection between their characters in the film, Ranveer and Deepika have been asked to stay away from each other as that is what they are required to do in the film also.

Yes, the two are staying away from each other and making people believe that they are no longer together and that will also make the audience connect with their characters in the film. Also, Padmavati is Sanjay Leela Bhansali’s ambitious and huge project, Deepika and Ranveer don’t want to take any such step that would affect the shooting and the release of the film.

Also, this is the reason why Deepika chose to upload her picture with Ranbir Kapoor and not Ranveer Singh on the occasion of Holi. Well, a smart move!

Sanjay Leela Bhansali’s historic film Padmavati features Deepika Padukone as queen Padmavati opposite Shahid Kapoor who will be seen as her husband, Ratan Singh. Ranveer Singh portrays the character of Alauddin Khilji in the movie.