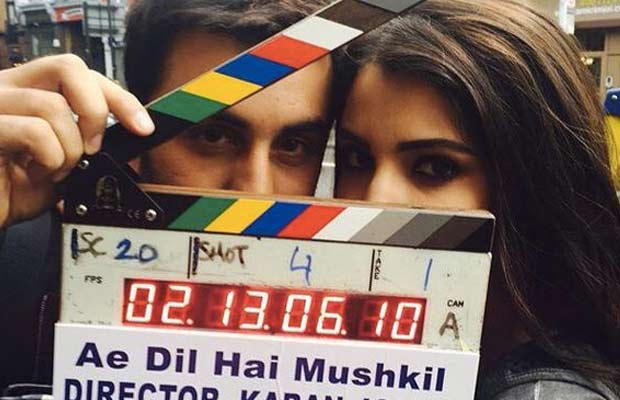 [tps_footer]Ranbir Kapoor and Anushka Sharma will soon flaunt their acting skills in ‘Ae Dil Hai Mushkil’. The Karan Johar directorial movie also features Aishwarya Rai Bachchan in lead role. The shooting of the much in limelight movie is already going on in full swing. With an enchanting star cast the plot of the film is still under speculations. With curiosity levels so high, the character names of Ranbir and Anushka have finally come on the forefront.

‘Ae Dil Hai Mushkil’ will see Ranbir Kapoor playing the character named Amit whereas Anushka will be named Alizeh. The two stars who are always spontaneous leaked out an image wherein they are posing with a clap board with their character names written on it.

The clap board reads, “Hi, we are Amit and Alizeh”. Aishwarya’s name in the film is yet not known and also the roles of the actors are still kept under wraps. According to reports, ‘Ae Dil Hai Mushkil’ is a romantic flick which will deal with heartbreaks and relationships.

Ranbir and Anushka will be seen playing a duo in the film whereas Aishwarya might romance with Ranbir too. Not much about the plot of the film is yet known. The film also has brief appearances by Fawad Khan and Lisa Haydon.

Other than the romantic flick ‘Ae Dil Hai Mushkil’, Ranbir, Aishwarya and Anushka are also busy with their other projects. Ranbir Kapoor is roped in for Sanjay Dutt biopic and will soon start training for the same, whereas the Bachchan bahu will be seen in ‘Sarbjit’ biopic. Anushka Sharma on the other hand has bagged the lead role in ‘Sultan’ opposite Salman Khan. The Karan Johar directorial is all set to hit the screens on October 28th, 2016.[/tps_footer]