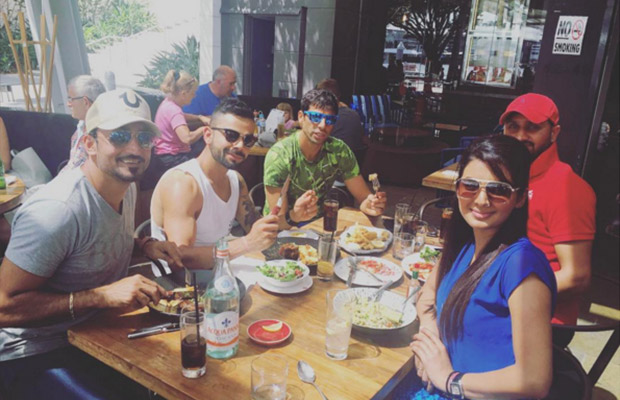 [tps_footer]Star cricketer Virat Kohli was recently spotted with newly married duo Harbhajan Singh and Geeta Basra. The three celebs were seen chilling together enjoying yummy delicacies in Sydney. Well, to note Virat’s lady love Anushka Sharma did not join the gang in their hangout session. Virat was spotted without Anushka, while Harbhajan looked all content with wife Geeta Basra.

Many reports recently suggested that Anushka and Virat are also soon going to part ways. The two celebs who have never shied away from accepting their relationship amidst the shutterbugs are rumored to be parting ways.

There have many instances when Anushka Sharma and Virat Kohli are spotted not caring about the lenses. Their adorable stints for one another are also not a secret. However, it seems that there is a trouble in paradise now. Speculations suggest that Virat wanted to get hitched to Anushka in this year itself, but the PK actress wants to concentrate on her career. The stated dilemma is the cause of their relationship hassle.

The highly talented actress Anushka who is kissing success with each of her passing films has recently bagged the much in limelight movie ‘Sultan’ opposite Salman Khan. The starlet is surely on cloud nine with such a massive opportunity.

It is being said that Anushka Sharma did not join Virat, Harbhajan and Geeta in Sydney because the actress is busy with the schedule of ‘Sultan’. It is also much in the air that Anushka and Virat have unfollowed each other on certain social networking sites. Neither Virat Kohli nor Anushka Sharma have yet confirmed the news on their break up.[/tps_footer]