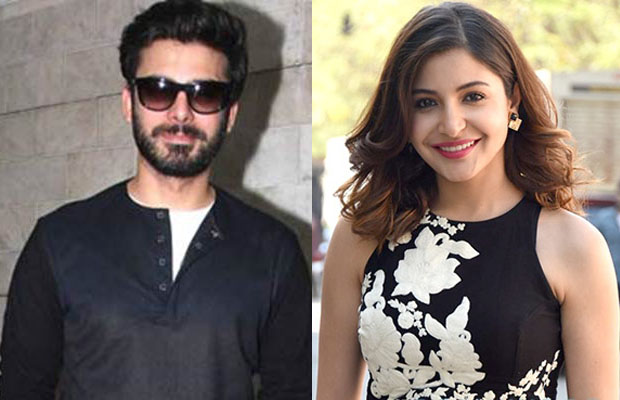 [tps_footer]The upcoming movie, Ae Dil Hai Mushkil is already exciting us with its star cast. In this Karan Johar movie, we will get to see Aishwarya Rai Bachchan, Ranbir Kapoor, Anushka Sharma, Fawad Khan, one more Pakistani handsome hunk Imran Abbas Naqvi, Lisa Haydon, Deepti Naval and Saif Ali Khan. It’s reported that Saif Ali Khan will give a cameo appearance in this movie and everything about this movie was kept under the cover. But, how long can that be possible ? So, here we are ready to share with you about the characters played by Khubsoorat Fawad Khan and Anushka Sharma.

It’s said Fawad Khan and Anushka Sharma will be playing Pakistanis in the movie. Yes, they will be the love interest of each other and we may get to see them performing on some romantic tracks. But, don’t you feel Fawad Khan is being typecast. We all know he is a Pakistani actor, but it looks like this identity is just stuck with him. Anyways, we hope he gives his best like all the projects he has done so far. And, we hope even this movie will be a blockbuster hit for him just like Kapoor And Sons.

It’s reported that Fawad Khan will play the role of a Dj and Anushka Sharma will come from a typical Nawab family. These two will meet in a foreign country although they come from Karachi and later, they fall in love. The story doesn’t end here! The big twist is that Fawad Khan in this movie plays the character of a Dj, for us it’s cool, but not for Anushka’s family in the movie. They reject Fawad Khan saying that he belongs to a lower class, Bhand family which means a jester or an entertainer. And, still this is not the end of the story. What you feel, a fearless girl like Anushka Sharma will just leave it there and won’t try to be with her love? It’s said, Anushka feels horribly bad for Fawad Khan and she leaves her home, family to be with her Prince Charming a.k.a Fawad Khan.

Now, this is only about Fawad Khan and Anushka Sharma’s characters in the movie Ae Dil Hai Mushkil. Keep reading, we will tell you soon about other characters too. And, we hope with this movie Pakistani actor Imran Abbas Naqvi gets his first hit in Bollywood. He has been part of Creature 3D, Jaanisaar but both the movies flopped at the box office.