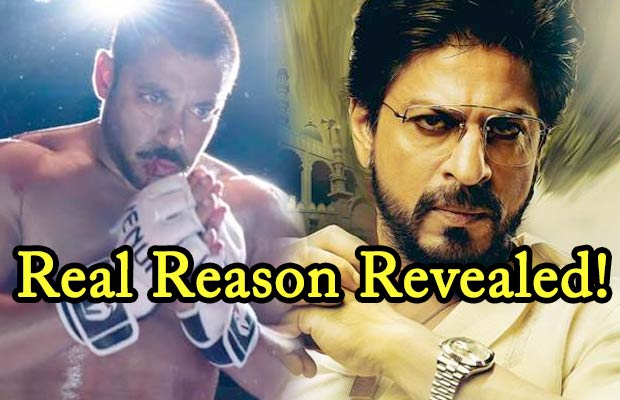 [tps_footer]We were ready and excited to watch the biggest clash of all times as earlier it was said that Shah Rukh Khan‘s Raees and Salman Khan‘s Sultan is set to release on this Eid. It looked like none of them are worried about the clashes but are still looking forward to changing the date of releasing two big movies to avoid any kind damage to their movies and it’s business, as a single release date is the most desirable one for all the filmmakers. And, after Shah Rukh Khan received a thanda response at the box office for his Fan, a lot of people expected Shah Rukh to take a U-Turn on the release date of Raees and release it later by keeping a long gap between his two movies release.

During an interview, Shah Rukh Khan revealed the real reason behind changing the dates of Raees starring Mahira Khan, Nawazuddin Siddiqui. Shah Rukh said the shooting for Raees and especially his action scenes were not done the way he wanted it to turn out. He was injured on the sets of Raees and shooting for this flick got delayed for 8-9 months, after recovering SRK started shooting for Raees but they shot the scens in a rush to complete this flick which SRK is not pleased to see and the reshooting of all the scenes and shooting the remaining scenes took more time. So, it’s not his fear of failure or facing a tough competition but SRK‘s injury and the delay in the shoots has been the real reason for him to change the release date of Raees.

Avoiding a clash with Salman‘s Sultan, it was reported that Raees will clash with Ajay Devgn‘s directorial venture Shivaay but now SRK is sure of releasing his movie on January 26, 2017, to avoid clashes with any movie. This year we will see movies like Akira, Dangal, Sultan, Shivaay, Mohenjo Daro, Udta Punjab, Housefull 3, Junooniyat, Dishoom, Great Grand Masti, Rustom, Banjo, and more. It’s a real smart decision taken by our King Khan to release Raees in 2017 and we wish the best for Raees and all the upcoming movies of Bollywood.

Tell us which movie you are waiting to watch the most?[/tps_footer]