Veteran actor Om Puri, known for a variety of roles in many Bollywood and Hollywood films, died on Friday from a massive heart attack. Since this tragic news came in, much of the Bollywood celebs have been mourning over the sudden demise of the actor.

Om Puri would be last seen in the upcoming Eid release ‘Tubelight’ with Salman Khan. Salman Khan also joined in to mourn his death and took to his Twitter handle to share his condolence over this loss. He posted a picture of his Tubelight co-star on Instagram. Salman has shared a picture from the sets of ‘Tubelight’ which sees him in conversation with the late actor between their shooting. He also wrote a heartfelt caption for him, which read as, “So sad. Lost one of the most iconic actors, RIP Om Puri Ji.” 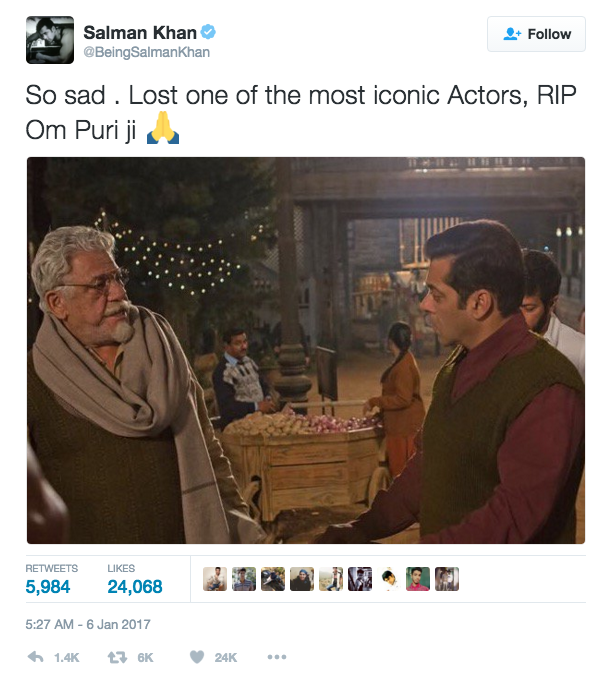 In the picture Om Puri and Salman can be seen interacting with each other. Om Puri is wearing a sweater and a shawl, while Salman has a maroon shirt and a brown sweater on himself.

When Nawazuddin Siddiqui was asked about Om Puri, Nawaz said, “It is very sad to hear this news. I think he was one of the best actors in the world. Two or three days from now I was going to do a scene with him in Manto. He was in the film and we had prepared for it too. He was playing the judge and I was going to play Manto. We were going to have a discussion, but it is a very big loss to the industry. It feels really bad.” The actor was supposed to shoot with Om Puri in a few days.

Also Watch Video: Whoa! You Won’t Believe What Salman Khan Will Be Playing In His Next!