Veteran Bollywood actor Rishi Kapoor is known for his outspoken nature. He is not someone to mince words, he has often created storms online with his frank tweets.

The actor did it again !! but this time to praise Fatima Sana Shaikh who played the role of Geeta Phogat in Aamir Khan‘s Dangal.

He took to Twitter about the young actress and tweeted, “Prediction. This girl Fatima of Dangal will be a huge star. Let her hair grow! Or maybe not you never know lol.” We learn that the dig in his tweet might just be for the actress’s in the business currently.

When Fatima learned, the actress too reacted saying, Oh my god!!!! Thank you so much, sir! I am a huge fan of yours. I hope aapki prediction sach ho jaae.” 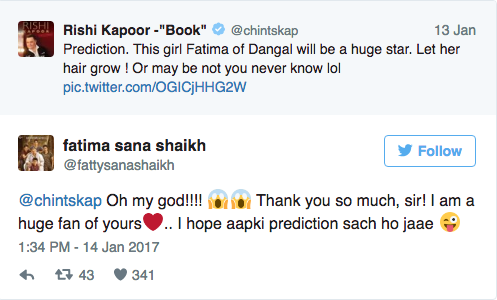 The veteran actor who saw the film has loved Fatima‘s performance tremendously and in his statement socially is refreshingly supporting Fatima through his twitter handle. Fatima’s powerful debut has been a point of conversation across! It seems that the actress is here to stay for a long run pure on basis of her talent.

Fatima started her acting career as a child artist in Chachi 420.