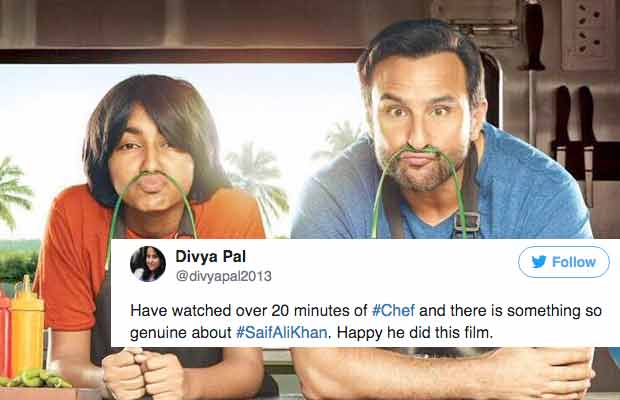 The Indian adaptation of Jon Favreau’s Hollywood hit Chef, starring Saif Ali Khan, has finally released today at the Box Office. The remake is directed by Raja Krishna Menon, who had earlier made Akshay Kumar starrer Airlift. Considering this, the expectations among the audience are clearly high. The trailer and refreshing music of the film were well received by the audience but the film could not create the much-needed hype before the release. Well, films of different genres attract the audience and Saif Ali Khan’s ‘Chef’ is likely to attract people.

The film is a unique tale of a journey that Roshan Kalra (played by Saif Ali Khan) undertakes to find out his true priorities and source of happiness. It’s a story of food and love and family and togetherness, and that of a father’s rediscovery of the bond with his son.

Directed By Raja Krishna Menon, the film is based upon the 2014 Hollywood hit by the same name, which was directed by Jon Favreau. Chef stars – Saif Ali Khan, Svar Kamble, Padmapriya and Chandan Roy Sanyal in the lead roles.

Could makers of the film ‘Chef’ keep the flavour of the film intact to the Indian palate? Check out what audience has to say about the film:

Have watched over 20 minutes of #Chef and there is something so genuine about #SaifAliKhan. Happy he did this film.

#Chef Review: That hunger satisfaction when you get what you order and have your tummies up with a good and healthy feeling. Go watch! (3/5)

Target of #Chef is Multiplex audience. And without doubt , they will love this film a lot. So Congrats🎉 to Makers. Its Sure Shot WINNER 🎉👌🎉